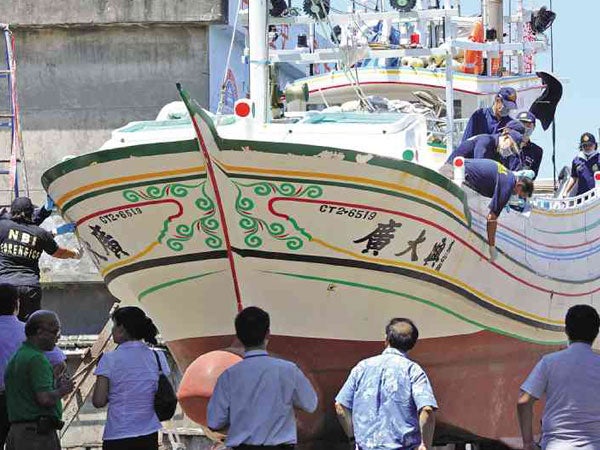 CLOSE TO CLOSURE In this photo taken on May 29, NBI agents assisted by Taiwanese probers inspect the bullet-riddled fishing boat Guang Ta Hsin 28 at the Tungkang harbor in Taiwan. The NBI has recommended the filing of homicide charges against eight Filipino Coast Guard personnel for the death in May of a Taiwanese fisherman on his boat. AFP

MANILA, Philippines—The National Bureau of Investigation said Wednesday it was recommending homicide charges against eight Filipino coast guards for the killing of a Taiwanese fisherman in May.

Taiwanese prosecutors brought homicide charges against the eight Filipino coast guards in Taiwan on Wednesday, in what is seen as a symbolic move that signifies agreement with the Philippine investigators’ findings.

At the same time, Taiwan’s foreign ministry announced that it would recommend that the government in Taipei lift sanctions against the Philippines and improve relations between the two countries.

The NBI recommendation is a downgrading of the murder charges brought by the fisherman’s daughter during the Philippine investigation of the case in Taiwan in June.

“The incident was unplanned and unpremeditated,” as it happened while the coast guards were conducting legitimate law enforcement, though a “deadly weapon was wrongfully applied,” the NBI report said.

It also said “there was no abuse of superior strength because the firing was made intermittently and not fully taken advantage of by the Philippine Coast Guard (PCG) personnel.”

“The force employed was mainly aimed to disable the engine and not to maim or kill the fishermen,” the report said.

“[The] eight PCG personnel were the ones who had admitted to having fired their firearms” leading to the death of 65-year-old fisherman Hung Shih-chen, Rojas told reporters in a news conference.

“[Their] collective act of indiscriminately firing at the fishing vessel makes them equally liable for the death of the Taiwanese fisherman,” Rojas said.

Since all eight admitted firing guns, they would all face the same charge under the principle that they acted in “conspiracy,” Rojas said.

“The NBI report recommends that criminal charges of homicide be filed against these eight PCG personnel,” Rojas said.

“Though there were 17 PCG [personnel] on board the vessel, only eight fired directly at the Taiwanese boat, including their commander,” Rojas said.

The commanding officer of the Philippine vessel MCS-3001, Arnold de la Cruz, the executive officer, Lt. (j.g.) Martin Bernabe, and two other coast guards, Seamen First Class Mhelvin Bendo and Marvin Ramirez, will also be charged with obstruction of justice “because they tampered with evidence during the investigation,” Rojas said.

Explaining the obstruction charge, Rojas said the four men spliced a videotape of the incident with the intention of removing incriminating evidence.

The NBI report quoted Ramirez as saying that Bernabe instructed him to splice portions of the tape that “showed the PCG crew firing at the Taiwanese vessel.”

The NBI report said De la Cruz also allegedly ordered the falsification of his unit’s monthly gunnery report “to reflect a smaller amount of ammunition used during the shooting incident.”

Among those to be charged with homicide in Manila is Seaman First Class Edrano Quiapo Aguila, who was found to have fired the bullet that killed Hung.

Rojas said the charges would be filed in the Department of Justice.

Under Philippine law, the prosecutor will determine whether there is enough evidence to take the case to court.

If convicted the eight coast guards face 12 to 20 years in prison, Rojas said.

Calling Manila’s move a “constructive response,” the Taiwanese foreign ministry said Wednesday it would recommend that the Taipei government improve relations with the Philippines, including lifting sanctions imposed after the shooting death of Hung.

In a separate move, Taiwanese prosecutors on Wednesday charged the eight Filipino coast guards with homicide in Taipei.

The indictment was considered symbolic as it is unlikely that the Philippines will allow the accused to be tried in Taiwan due to the lack of formal diplomatic ties between the two countries.

“The Philippine Coast Guard illegally chased an unarmed fishing boat for 75 minutes and fired more than 100 shots at it, which was clearly not proper defense . . . and with an intent to kill,” the Taiwanese prosecutors said in a statement.

Bernabe and Ramirez will be charged only with obstruction of justice.

Nine other coast guards who were on the MCS-3001, as well as three Bureau of Fisheries and Aquatic Resources (BFAR) personnel with them, will not be charged, Rojas said.

The MCS-3001 is owned by BFAR, but operated by the Philippine Coast Guard.

The PCG declined to comment on Rojas’ announcement of the results of the NBI investigation of the shooting death of Hung.

Cmdr. Armand Balilo, PCG spokesman, said the command was still waiting for a copy of the NBI investigative report.

“If our men are found to have violated the Coast Guard rules of engagement, then they would have to face the consequences of their actions,” Isorena said.

The shooting happened on May 9 off Balintang Island in waters claimed by both the Philippines and Taiwan.

The coast guards claimed the Taiwanese fishing boat Guan Ta Hsin 28 intruded into Philippine waters and refused to heave when they ordered it to stop.

Instead the fishing boat tried to ram the MCS-3001, forcing the coast guards to shoot it in self-defense, they claimed.

But Rojas said the coast guards failed to prove that the fishing boat tried to ram their vessel.

In an interview, Rojas said poaching charges could be brought against the Taiwanese fishermen and this would be based on the recommendation of the BFAR personnel who were aboard the MCS-3001 during the incident.

Rojas said the incident happened in Philippine waters, approximately 72 kilometers from the country’s baseline and within its exclusive economic zone.

Rojas said no outside influence led to the NBI recommendation to bring homicide charges against the coast guards.

Rojas said the 84-page report was submitted to President Aquino on June 10.

The NBI released the result of its investigation on Wednesday after Malacañang had given clearance to make it public through Justice Secretary Leila de Lima, Rojas said.—With reports from Jerry E. Esplanada and AFP