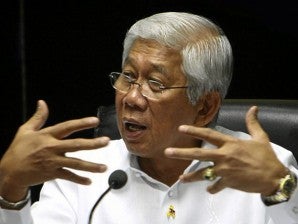 MANILA, Philippines  – The Philippines plans to relocate major air force and navy camps to a former US naval base north of Manila to gain faster access to waters being contested by China in the South China Sea (West Philippine Sea), according to the country’s defense chief and a confidential government report.

Defense Secretary Voltaire Gazmin said Sunday that as soon as relocation funds are available the government plans to transfer air force and naval forces and their fleets of aircraft and warships to Subic Bay, which has become a busy free port since the 1992 departure of the US Navy.

“It’s for the protection of our West Philippine Sea,” Gazmin told The Associated Press by telephone, using the name adopted by the Philippine government for the disputed South China Sea.

“We’re looking now for the funding,” Gazmin said from South Korea, where he was on a visit.

Subic Bay is a natural deep harbor that can accommodate two large warships acquired recently by the Philippines from the United States, a defense treaty ally, he said, especially compared to shallower waters at the naval fleet base at Sangley Point in Cavite province, south of Manila.

A confidential defense department document obtained by the AP says Subic’s location will cut reaction time by fighter aircraft to contested South China Sea areas by more than 3 minutes compared with flying from Clark airfield, also north of Manila, where some air force planes are based.

“It will provide the armed forces of the Philippines strategic location, direct and shorter access to support West Philippine Sea theater of operations,” the document said.

The report said the cost of repairs and improvements for an air force base in Subic would be at least 5.1 billion pesos (about $119 million). It said that compares with an estimated 11 billion pesos ($256 million) that it would cost to build a new air force base, because the vast Subic complex about 80 kilometers (50 miles) west of Manila already has a world-class runway and aviation facilities.

Relocating about 250 air force officers and men to Subic, along with “increased rotational presence of foreign visiting forces” would bolster business and trade at the port, the military document said.

The Philippines plans to grant visiting US forces, ships and aircraft temporary access to more of its military camps to allow for a larger number of joint military exercises than are currently staged each year.

A larger US presence could be used for disaster response and serve as a deterrent to what Philippine officials say have been recent aggressive intrusions by China into its territorials waters.

The Philippines has backed Washington’s efforts to reassert its military presence in Asia as a counterweight to China’s rise. While it has taken diplomatic steps to deal with China’s sweeping territorial claims in the South China Sea, the Philippines has struggled to upgrade its military, one of Asia’s weakest.

Philippine vessels backed off from the disputed Scarborough Shoal last year after weeks of a tense standoff with Chinese surveillance ship, a move that gave China effective control over the vast fishing ground off the country’s northwest.

Many fear the territorial conflicts in the South China Sea that also involve Brunei, Malaysia, Vietnam and Taiwan, could set off a serious conflict that could threaten Asia’s growing economies.