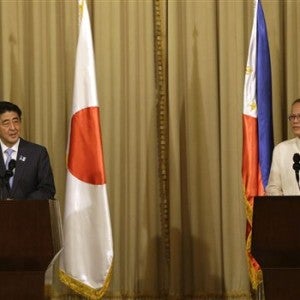 MANILA, Philippines—President Benigno Aquino III and Japanese Prime Minister Shinzo Abe on Saturday pledged to pursue a common stance against maritime aggression in the Asian region amid their growing territorial disputes with China.

“We reviewed the security challenges that confront our nations and pledged to cooperate in advancing our common advocacy for responsible action from international players,” said Mr. Aquino, reading from a prepared statement following his meeting with Abe.

The Philippines has an ongoing maritime dispute with China in the West Philippine Sea (South China Sea), while Japan is locked in a sovereignty row over the islands called Senkaku by Japan and Diaoyu by China.

In their statements, however, neither President Aquino nor Abe mentioned China by name.

He thanked Japan for building 10 “multi-role response vessels” for the Philippine Coast Guard and providing communication systems for coast patrol through a yen credit facility.

Abe, reading from his own prepared statement, described the Philippines as a “strategic partner with whom we share fundamental values and many strategic interests.”

He said he intended to attach particular importance to Japan’s relationship with the Association of Southeast Asian Nations (Asean), adding that he had conveyed this to President Aquino.

He announced the four initiatives of Japanese diplomacy in the Philippines which cover economic matters (including cooperation in transportation infrastructure in Metro Manila), maritime cooperation, the Mindanao peace process, and people-to-people exchanges by increasing the number of scheduled flights between the two countries.

He then announced the provision of a newly created standby loan credit for disaster response amounting to 10 billion yen.

As a gift, Abe presented Mr. Aquino with a digital topographic map of Mindanao to “strengthen assistance” for the Mindanao peace process.

“In order to benefit future economic development, we have created a very accurate and leading-edge topographical mapping of Mindanao,” said Abe.

The existing maps of Mindanao were based on 50- to 60-year-old data, posing numerous challenges for developmental programs and projects in the region. The map presented to Mr. Aquino was a print copy of a multifunctional digital map, which is a product of an electronic compilation of data on topography, vegetation, hydrology and infrastructure.

Mr. Aquino thanked the Japanese government for its decision to encourage more Filipino tourists to visit Japan by allowing multiple entry visas and the expansion of the Japan-East Asia Network of Exchange for Students and Youth program.

He thanked the prime minister for Japan’s commitment to Philippine development, and for extending assistance in critical areas such as infrastructure development, transportation, connectivity, and disaster preparedness and response.

“The relationship between Japan and Asean serves as a cornerstone of harmony and dialogue in our part of the world,” said Mr. Aquino.

Aside from security concerns in the West Philippine Sea and the East China Sea, the two leaders also talked about actively pursuing strategies for growth, noting the resurgence in the two nations’ economies.

They agreed to strengthen bilateral policy dialogues and to continue high-level visits and people-to-people exchanges.

Also, under the Japan Bangsamoro Initiatives for Reconstruction and Development, or J-BIRD, the amount of assistance to Mindanao has reached P6.6 billion.

Mr. Aquino said J-BIRD was vital to the socioeconomic development of the Bangsamoro area.

Japan is the Philippines’ top trading partner, top source of official development assistance, and one of its largest sources of foreign direct investment and foreign tourists.

Japan is also the Philippines’ top trading partner in 2012, with total bilateral trade amounting to $16.35 billion.

Japan is also the Philippines’ third largest source of tourists—412,474 Japanese nationals visited the country in 2012.

This is the third time Abe has visited the country.

His last visit was in 2006, during his first term as prime minister.

His daylong official visit began with a wreath-laying ceremony at Rizal Park in Manila after which he motored to Malacañang, where he was accorded traditional arrival honors for a visiting head of government.

Both leaders briefly met in the Music Room before presiding over an expanded bilateral meeting attended by Ambassador to Japan Manuel Lopez, 12 Japanese officials and their 10 counterparts in the Aquino Cabinet.

Following the reading of the individual press statements, Mr. Aquino hosted an official luncheon in honor of Abe and his entourage.