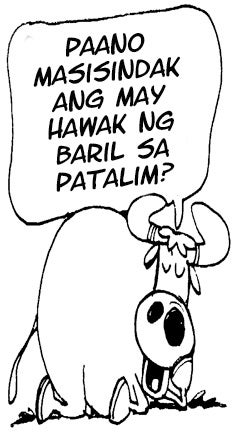 President Aquino has been hot about this week’s arrival of the Philippines’ second Hamilton-class cutter from Hawaii, but an analyst calls the secondhand vessel another “balisong” (fan knife) to China’s “machine gun.”

The newly acquired BRP Ramon Alcaraz docked at Guam Naval Base on Saturday after a 10-day voyage across the Pacific Ocean from Pearl Harbor in Hawaii. It was scheduled to leave Guam on Sunday afternoon for the last leg of its voyage to its new home, the Philippines.

The Department of Foreign Affairs (DFA) said the 88 officers and crew of the Ramon Alcaraz led by its commanding officer, Capt. Ernesto Baldovino, were welcomed to Guam by the Philippine Consulate and Filipinos living on the island during the stopover.

The DFA did not say when the cutter would arrive in Manila, but earlier reports quoted officials as saying it was due in Manila on Aug. 3.

“Apart from modern arms, vehicles and higher grade of training for our men, we’re excited about the arrival of our second Hamilton-class cutter,” the President told members of the Armed Forces of the Philippines Officers Candidate School Alumni Association Inc. in Camp Aguinaldo on Friday.

Aquino spoke about the cutter as he crowed about the release of P26.27 billion for the military’s modernization in the last three years, and his signing of the P75-billion AFP Modernization Act in December last year.

But Benito Lim, a professor of political science at Ateneo de Manila University, played down the impact of the cutter on the country’s external defense, arguing it could hardly match China’s sophisticated firepower.

Since it was decommissioned by the United States, the cutter had been stripped drown to remove its electronic systems and weapons, and the Philippines had to pay for its refurbishment to restore its capabilities, Lim said.

“The US knows the Chinese have sophisticated armament. They have missiles that can hit the Philippines. And yet they gave us balisong to China’s machine gun,” Lim said by phone.

“Even with another balisong, [we still cannot] defend [our] territories. What’s painful is that we’re spending so much on something that will not allow us to keep the territories that we claim, that will not lead to ownership of contested territories,” Lim said.

“These are obsolete vessels [and] we can’t defend ourselves with [them]. Why are they giving these to us? Are they our friends?” Lim said.

There are other ways to get a better deal than “junk and obsolete vessels” and the Philippines can get one such deal by talking to China, Lim said.

Both the Gregorio del Pilar and the Ramon Alcaraz will patrol Philippine coastal waters in the face of China’s growing military might and increasingly assertive presence in the West Philippine Sea (South China Sea), where the two countries are disputing ownership of islets, reefs and atolls believed to be sitting on vast energy reserves.

China claims nearly the entire sea, including waters close to the shores of its Southeast Asian neighbors.

With nothing to match China’s firepower, the Philippines has taken its territorial dispute with China in the West Philippine Sea to the United Nations for arbitration.

Refusing to take part in the arbitration, China armed its maritime surveillance vessels and sent three of them to the Spratlys in the middle of the West Philippines Sea where the Philippines has claims, including five islets called the Kalayaan (Freedom) Group and Ayungin Shoal (Second Thomas Shoal).

Philippine sovereignty in the Spratlys is guarded by an old, rusty naval transport vessel that Manila ran aground on Ayungin Shoal in May 1999 to mark its territorial boundary.

The second secondhand cutter is part of the US offer to help the Philippines strengthen its Navy following the declaration by then US Secretary of State Hillary Clinton that the United States would be neutral in the sea disputes, according to Lim.

Lim said the acquisition of the cutters was an “exercise in futility.”

“P-Noy’s advisers are not realistic. They think it’s a military solution. The solution is peaceful negotiation,” said Lim, who has proposed that the Philippines explore the possibility of negotiating with Beijing joint development of the disputed areas.

Lim, a political economy consultant to the Philippine Embassy in China in the 1970s, said he had some suspicions about the military’s pushing for the acquisition of cutters even though these were no match to China’s warships in the West Philippine Sea.

“There could be some commission somewhere along the way,” he said.

Lim said Japan’s offer to build 10 “multirole response vessels” for the Philippine Coast Guard through a yen credit facility during Japanese Prime Minster Shinzo Abe’s visit to Manila over the weekend was in the same mold.

“Why are they selling us junk? They’re taking advantage of us and selling us obsolete weapons that will not get us the contested islands,” he said.

Aquino and Abe vowed to pursue a common stance against maritime aggression in the region. Japan is also locked in a dispute with China over a group of islands in the East China Sea called Senkakus by the Japanese and Diaoyus by the Chinese.

In his speech at Camp Aguinaldo, Aquino said he was all for military modernization but this should not be at the expense of education, health and employment of Filipinos.