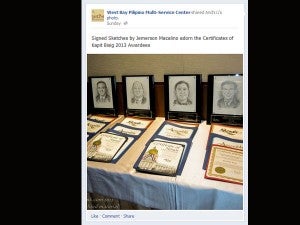 SAN FRANCISCO—Eight men and women who have donated their time, talent and services to programs that improve the future and quality of life of the Bay Area’s Filipino-American community, particularly its youth, received the Distinguished Citizens Kapit-Bisig awards at a gala lunch Saturday, June 22, at the Intercontinental Hotel of San Francisco.

The Kapit-Bisig Awards is a project of the West Bay Filipino Multi-Service Center, a non-profit group that provides culturally relevant assistance and social services to the Filipino-American community in the Bay Area.

This year, for the first time, West-Bay introduced the idea of pairing the awardees with deserving youth from its After School Academic Enrichment and Mentorship Program, as part and parcel of the award. The concept is for each awardee to take on and mentor one boy or girl from the program and serve as the mentee’s role model and adviser.

This is West-Bay’s current flagship program and is meant “to create a generation of future distinguished citizens…. and usher the children to future success.” The children-mentees were chosen based on their grade point averages for the school year.

The Distinguished Citizens Kapit-Bisig Awardees for 2013 and their respective awards categories are:

— Rob Bonta, for Public Service. Bonta is a California State Assemblyman representing the 18th District that includes the cities of Oakland Alameda and San Leandro. He is the first Filipino-American to be elected to the California State Legislature. Sending their kids to college was no easy task for his parents and Bonta helped by cleaning laundry rooms and securing financial aid. His determination and that of his parents’ paid off. His educational resume counts studies and degrees from Yale College, Oxford University, and Yale Law School. He will mentor 12-year old Michael Angelo Cruz, a 7th grader who dreams of becoming an architect someday.

— Jeffrey Burgos, for Education. Burgos’s career in education started during a trip to Guam with the Ateneo Glee Club. He received a job offer to teach in Guam, an offer he promptly accepted. From there, Burgos moved on to higher positions in elementary education including working as principal of the Bessie Carmichael Elementary School in San Francisco and as current principal of Roof Top Elementary School, also in San Francisco.  His mentee, Jemerson Macalino, is a 17-year-old 12th grader who plans to be an engineer and a visual artist.

— Ralph Colet for Innovation. Like many young boys, Colet loved toy cars and trucks, a love that he turned into a thriving business designing and building special airport rescue fire vehicles. The company, Colet Special Vehicles Design, of which he is owner and chief engineer, brings to life Colet’s concepts of specialty vehicles, one of them a gigantic, state-of-the-technology fire truck that can accelerate from zero to 50 miles per hour in 17 seconds while carrying 4,200 gallons of fire suppression liquid or foam. He will mentor 13-year-old and 9th grader Marjorie Anne Ruiz who, fittingly, dreams of becoming an engineer when she grows up.

— Ezra Garrett for Corporate Leadership.  Ezra Garrett, being of Filipino descent a generation or two removed, is credited in the Fil-American community with having broken the “bamboo ceiling” when he reached the highest corporate management level, that of vice president, in a major US corporation. He is vice president for community affairs for Pacific Gas and Electric Company (PG&E) where part of his job is to establish bridges between the giant corporation and the communities around it. Having grown up in a tough Sacramento neighborhood where there were few role models, Garrett says he is looking forward to being a role model and mentor to Bon Salvador, his 14-year-old, 8th grade mentee.

— Angie Louie, Philanthropy. Ms. Louie is president of the San Francisco Filipino-American Chamber of Commerce. She is also a restaurateur and owns Hana Zen, a popular Japanese restaurant in Union Square and in Pier 39 but is equally well-known for raising funds for and donating her time and services to the Philippines International Aid, the Asian Pacific Heritage Foundation, and the Dance Sport Team of Cebu City, which reaches out to kids in the remote and depressed areas of Cebu, Philippines. Angie Louie will be mentor to 14-year-old Leriza Madriaga, a 9th grader who wants to work with the FBI when she grows up.

— Rod Mercado, Entrepreneurship. Mercado’s entrepreneurial odyssey started in his early youth when his father passed away and he had to be the sole support of his mother and siblings. He did so by collecting, buying and selling recyclables. From this youthful venture, he went on to establish other successful businesses until he found himself facing bankruptcy years later. From the lessons he learned from this near-disaster, he established Financial Rescue, LLC, a company that markets debt relief and legal services for those with financial concerns. He is president and CEO. He will mentor Jerold Yu, a 16-year-old 7th grader and budding robotic engineer.

— Marily Mondejar, Community Service. Mondejar is the San Francisco commissioner on community investment and infrastructure. In 2009, having been herself a victim of domestic violence in the past, she founded the Filipina Women’s Network, an organization that advocates against domestic violence and sex trafficking of Filipinas, and champions women’s rights. State Senator Leland Yee has named her California Woman of the Year for 2013. She will mentor Janice Madriaga.

— Dr. Carmelo Roco, Medicine. In an age when house calls are but a quaint idea, Dr. Roco travels far and wide to help people in need of medical care, heading medical missions to rural areas in the Philippines. He has been known to even drive his patients home or to hospitals when that is what was needed. He is currently planning a medical mission to bring medical care to far-flung aboriginal Philippine tribes. He is the president of the Philippine Medical Society of Northern California. He will mentor 8th grader Darin Abad, 13, who wants “to be a pediatrician someday.”

At one point in the afternoon, Rudy Asercion, West Bay’s executive director, asked Leonard Blakesley, a majority owner of the Intercontinental Hotel and one of the evening’s presenters and special guests, to come up the stage and receive a “long overdue” trophy as a symbol of gratitude for the $60,000 he donated seven years ago that jumpstarted West Bay’s After School Program Academic Enrichment and Mentorship Program.

Auctioned were autographed Manny Pacquiao boxing gloves and jacket, Nautica sports bags, ethnic clothing items and artwork, even a Michelin-rated 9 course wine-paired dinner and consultation with each of two awardees, Ezra Garrett and Marily Mondejar, to be hosted by Intercontinental GM Peter Koehler.