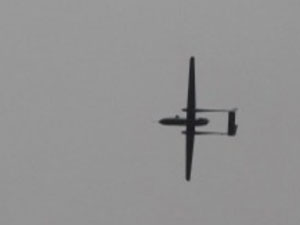 An Israeli drone is seen over Rafah town in the southern Gaza Strip on October 30, 2011. AFP FILE PHOTO

LONDON—Defense budgets in the Asia Pacific region will overtake the United States and Canada by 2021, according to a study by respected analysts IHS Jane’s published on Tuesday.

Weapons spending in China and other Asia Pacific countries is expected to rise 35 percent above its 2013 level to $501 billion (383 billion euros) by 2021, outstripping North America, the “Balance of Trade” study concluded.

“At this rate, defense trade between countries will have more than doubled by 2020,” the study says.

The United States remained the world’s biggest exporter of weapons in 2012 with $28.5 billion, up from $20.1 billion four years earlier.

But while spending in Asia rose, it fell back in Western Europe where exports were sharply down — its 34.5-percent share of the export market in 2008 fell to 27.5 percent in 2012.

“This is the biggest explosion in trade the world has ever seen.”

China is reducing the amount of arms it imports as it improves its own production capabilities.

But while China’s exports have doubled since 2008, it is being outpaced by South Korea which leaped 688 percent, putting it into the global top 20 with $753 million.

While China’s sales are predominantly to its regional neighbors, South Korea is increasingly succeeding in open, or competitive, markets.

“In terms of the quality of production, it is a mixed picture,” Ben Moores, senior forecasting analyst at IHS Jane’s, told Agence France-Presse.

“China do fairly well in exporting to their regional neighbors, but in open markets like the Middle East they are just not in the market.

“But it is a very different story for South Korea, which is exporting a range of equipment and selling to countries such as Indonesia and the Philippines, which are both very open.”

The study also predicts that Israel will sell twice as many drones as the United States in 2014 and will become the biggest exporter of the unmanned aircraft by the end of this year.

Israel was ranked sixth in the global league of arms exporters last year, with sales of $2.41 billion, a 74-percent rise on the $1.38 billion it sold in 2008. It traded predominantly with India.

“Israel is easily the most effective exporter in the world, despite the fact that many Islamic countries refuse to deal with them,” Moores said. “It just keeps growing its market share.”