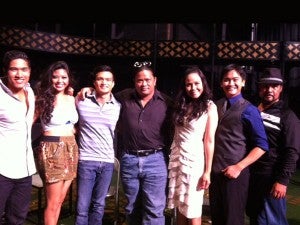 LOS ANGELES—Some 600 people showed up to audition for the East West Players’ production of “Chess the Musical,” and eight Fil-Ams came away with more than half of the 15 available roles.

“Chess” is directed by Tim Dang, with musical direction by Marc Macalintal and choreography by Marc Oka. The East West Players’ production portrays underpinning political conflicts that were muted in the Broadway version of the musical. “‘Chess’ is usually performed as a concert, focusing on its music, and is rarely done as a full theatrical production,” says Dang, EWP producing artistic director.

Dang is proud of the casting: “It enriches our theater-going experience, reflects the community in which we live, and offers opportunities to talented artists of color who might not have access to these roles elsewhere.

East West Players (EWP) is the nation’s largest producer of Asian-American artistic work and the longest-running professional theater of color in the country. “Chess” portrays the multicultural and global dimensions of the game via a love triangle set in the middle of an international chess battle between the US and Soviet Russia.

The players are treated like diplomatic representatives of the US and the Soviets, or as Victor E. Chan’s character Fredrick puts it, “I am democrat and you are Communist!”

That eight Fil-Ams are in the play is something of a breakthrough, given the challenges Fil-Ams must hurdle in the U.S. entertainment industry.

“It is still hard to get casted, unless it is something specific,” states Chan.

The Filipino casting of “Chess” also breaks down ethnic barriers. “The more popular Asians—such as Chinese, Japanese, Koreans—are more likely to be booked. Some Filipino-American actors go as far as changing their last name to sound more like a popular ‘yellow Asian,’ explains Ray A. Rochelle.

Almedilla says her parents still encourage her “to try other things, like physical therapy.” But her advice to young people is “Go for what makes you happy! Do what you love to do.” Cesar Cipriano adds: “Embrace your personal journey!”

DT Matias says his parents have been supportive of his career choice. “My mom and dad said to me after watching ‘Chess’ and the scene where I was only in underwear: ‘Oh! You have been working out huh!'”

Meanwhile, Shay Louise, the youngest Fil-Am in the cast, says she realized after acting that she was also interested in science. “I am currently in college as a Pre-Med student. I want to do both acting and medicine.”