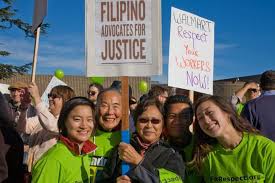 OAKLAND, California–Forty years. That’s how long the Filipino Advocates for Justice (FAJJ, a multiservice civil rights organization, has been serving the more vulnerable in the Filipino community in the San Francisco Bay Area’s “East Bay.”

Celebrating its 40th anniversary on June 20, FAJ has helped build a labor/community coalition to prevent the loss of jobs and services for the Filipino Americans in Northern California.

It has stood up to unjust laws and discriminatory practices, developed leaders and organized the community on major social issues. Its headquarters is in Oakland, with another office in Union City.

“Nono is an organizer and strategist for worker empowerment,” says FAJ organizer Fiona Cruz.  Over the last four years, FAJ has worked with some 70 Filipino homecare workers in the East Bay, San Mateo, and Fresno.

“I never wanted to be a leader,” said Nono. “I didn’t go past fourth grade and didn’t think I can lead. Now I’m doing so many things I never thought I could do. She’s active in PAWIS (People’s Association of Workers and Immigrants), which was initially formed to protect the jobs of airport screeners in the wake of the September 11 attacks.  Today it focuses on organizing and supporting home care workers.

One of FAJ’s founding members, Terry Bautista, was a University of California-Berkeley work-study student in 1971 who was hired by the International Institute of the East Bay (IIEB) to organize new arrival workshops for immigrants from the Philippines entering Alameda County.

“The immigrants had an array of adjustment needs–housing, jobs, referrals to doctors, dentists, school registration and placement,” Bautista said.

New immigrants were arriving at a time when postwar America’s discrimination, racial intolerance, language and culture bias and social barriers edged with violence were just starting to be challenged by a civil rights movement that was broadening from the black community. In 1965 the immigration quota from the Philippines leaped from 100 to 20,000 per year.

Until the early ’70s, Filipinos in the East Bay virtually had no organization to call on for help. Often, Bautista said, students who had already graduated from high school at 16 in the Philippines were misplaced, held back, and put into ESL classes mainly due to their accents and not necessarily lack of English proficiency 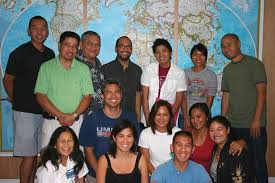 FAJ board of directors after a meeting.

The founders of FAA-FIS wanted to address discrimination that historically affected Filipinos. Many of the founding members had parents who came in the 1920s and the 1940s after WWI, who had faced racial intolerance, discrimination in housing, jobs and education. And the issues were plentiful.

In the ’70s correct ethnic identification of Filipinos was a problem because many had Spanish surnames. “I had to advocate for a correct count of Filipino students,” said Bautista who worked for the public schools. “It was also then when the Filipino community began raising the issue of bilingual education, since the emergence of large numbers of Filipinos was evident in schools.”

Other issues that emerged were testing of foreign-born professionals.  Tests were found to be culturally biased, so FIS helped to prepare nurses for certifying exams. Advocacy for Filipinos to be an affirmative action priority was launched in college entrance at the UC system and hiring at all levels.

Lillian Galedo, FAJ executive director, who joined FAJ in 1980, said she came on at a time that FAJ and other service organizations suffered a setback with the implementation of Proposition 13, a tax initiative that locked in big breaks in property taxes so they wouldn’t rise. Property taxes had been the source of funds for public services, and the group reeled from cuts in government funding.

But the group kept on going, on shoestring budgets. “It was a reflection of a lot of activism during that time–Asian Law Caucus was born along with Asian Community Mental Health Services.

FAA quickly became a voice for the Filipino community and the go-to institution for addressing various problems. Starting in the ‘90s, immigration reform and issues of undocumented status, citizenship and family reunification then became more serious, with Filipinos having a backlog to enter of more than 20 years for many cases.

FAJ’s aim is to build a strong and empowered Filipino community by organizing constituents, developing leaders, providing services, and advocating for policies that promote social and economic justice and equity. It serves the more than 130,000 Filipinos in the East Bay who are approximately 60 percent Philippine-born.  No other agency focuses on serving this population in this area.

Its core programs focus on “civic engagement,” which includes voter identification, education and mobilization, leadership development, community organizing and advocacy on issues of civil rights. For example, FAJ youth activists mobilized the growing Filipino electorate to use its vote in the November 2012 elections.

The youth development program offers alternatives to risky behavior in favor of cultural grounding, positive decision-making, healthier lifestyles, completion of school and community service. For the past seven years the stress has been on violence prevention. FAJ has provided more than 2,000 youth with prevention education on risky behavior.

Immigration services are a mainstay, providing naturalization and family reunification assistance, access to no or low-cost health coverage and social services and voter registration.

The organization has assisted more than 3,500 recent immigrants with immigration services like naturalization, family petitions, and referrals to lawyers for more difficult cases; educated and organized thousands about the major immigrant rights and civil rights issues over the past 40 years.

It current focus in this field is on passing a Domestic Worker Bill of Rights in California, and empowering care givers to make wage theft claims.

FAJ triumphed in the ‘80s in helping parents organize to get bilingual education in the Oakland schools. It opposed “English-only” initiatives in California, while setting an organization for parents to reform harsh expulsion and suspension policies.

By the ‘90s, Galedo said funding from the Alameda County and the city of Union City, resumed. But each year was a challenging one as there was a lot of “anti-immigration” sentiment and legislation.

“We lost in the battle,” lamented Galedo, against Proposition 187, which denied undocumented immigrants social services. Get further funding became elusive, she said, “as the economic crisis came sweeping in as a result of the 9/11 incident.”

In the aftermath of 9/11 terrorist attacks, FAJ helped immigrant airport screeners fight the layoffs caused by their replacement of US citizens.

FAJ reached a milestone in 2012, when youth organizers won a commitment from the Union City Council to remodel and reopen a closed youth center.

“And we played a leading movement-building role in the campaign to win  the Bill of Rights that was passed by the California State Assembly and Senate,” Galedo stated. “The governor vetoed it but we are back to win in 2013. ”

Despite the setback with the governor’s veto, FAJ has made strides in assisting caregivers and other workers. It has

•  helped workers develop their ability to negotiate for better working conditions, including contracts or written agreements;

• with non-profit lawyers, helped workers file wage theft complaints.  Workers have won more than $300,000 in wage theft victories, plus a $1.5 million decision, which an employer is appealing;

• trained workers to be activists in the Domestic Worker Bill of Rights campaign by attending rallies, educating legislators and training to be a strong advocates and community organizers.

• participated in and helped analyze the results of the first-ever national survey of domestic workers that was started in 2011, and helped popularize the report.

“We’re celebrating 40 years of gains while remaining aware of the big challenges ahead,” said Galedo.