China Sea row discussed in US officials’ call on DND 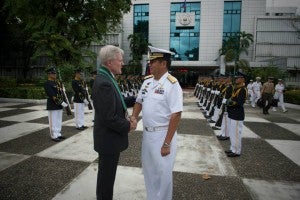 MANILA, Philippines—US Secretary of the Navy Ray Mabus discussed Tuesday regional security issues in a meeting with Defense Secretary Voltaire Gazmin and Gen. Emmanuel Bautista, the chief of staff of the Armed Forces of the Philippines.

“The representatives from the two departments discussed security issues in the Asia-Pacific region, modernization efforts, and the US’s commitment to provide humanitarian assistance in times of disasters/calamities,” the Department of National Defense (DND) said in a statement.

“Secretary Mabus further intimated the critical nature of the Philippines for the US rebalance in the Asia-Pacific,” the statement said.

Also in the meeting at the DND headquarters in Camp Aguinaldo were Navy Flag Office in Command Vice Adm. Jose Luis Alano, US Ambassador to the Philippines Harry Thomas, and Defense Undersecretaries Honorio Azcueta and Pio Batino.

Thomas described Mabus’ visit as a “mutually beneficial and important trip.” He said one of the issues discussed was the situation in the West Philippine Sea (South China Sea).

He noted that Mabus’ trip came on the heels of the trip to the Philippines by Adm. Samuel Locklear III, commander of the US Pacific Command.

“We have sent many high-level officials here in the last few years to show our military commitment,” Thomas told reporters.—Nikko Dizon