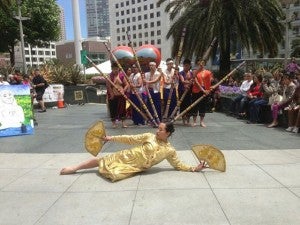 Where there were usually art shows and buskers, was now filled with food booths vending lumpia, adobo, pansit, mango tarts, and other Filipino delicacies.

There was a fashion show featuring haute couture as interpreted by Filipino designers. Of course, there can be no Filipino celebration without music and dancing, particularly folk dancing.

This year, some of the performances were done, not on the stage, but on the plaza level, giving it the look and feel of having impromptu street performers amidst the crowd.

The martial arts group Eskabo Daan gave a demonstration of the uniquely Filipino martial arts form that it practices and espouses, which bears some similarity to arnis de mano.

The grand finale was a special show by Apl.de.Ap, who had the crowd—many of whom came just for his performance—dancing, singing, jumping and clapping to his beat and screaming with joy at being able to enjoy this rare performance by a true world celebrity. 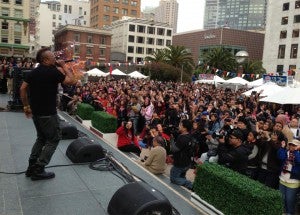 Apl.de.Ap used the entire stage as his dance floor, going from one side to the other in half-skip, half-dance as the rapt audience of little girls, dads and grandmothers and every age group in between sang and swayed to his rap and rock beat.

And for a retro touch, Fil-American Mitch Franco, who does Frank Sinatra as well as if not better than anyone on the planet, crooned smoothly. He was followed by the popular reggae group with Hawaiian flavor, the Bay Area’s own Mango Kingz.

The festivities were kicked off by Consul General Marciano A. Paynor, Jr., who awarded Apl.de.Ap a certificate of appreciation making special mention of the singer’s strong attachment to everything Filipino and of his foundation’s efforts to help in the schooling of the country’s poorest.

It was fitting and, at the same time, ironic, that the 115th year of Philippine independence would be celebrated in the shadow of the obelisk commemorating the defeat of the mighty Spanish Armada in Manila Bay in 1898 by a naval fleet led by Commodore George Dewey. It signaled the end of the Spanish occupation of the Philippines—and of Spanish domination of the high seas–and the beginning of American occupation.

But the ironies of history were the farthest thing on the minds of the Filipinos and the Filipino Americans gathered around the obelisk in Union Square last Saturday. They were there to celebrate their mother country’s culture, people, present and, hopefully, bright future.