US 7-11 stores rapped for exploiting Filipinos 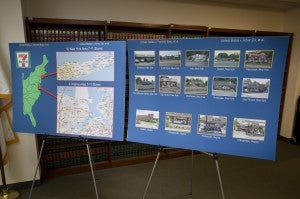 Graphics depicting the locations of 7-Eleven stores involved in a federal indictment are shown after a news conference at the US Attorney’s office, Monday, June 17, 2013, in the Brooklyn borough of New York. Philippine officials in the US are investigating the reported exploitation of Filipino immigrants at several 7-Eleven convenience stores in two East Coast states under a scheme likened to a “modern-day plantation system” where their wages are withheld and their employment concealed under stolen identities. AP PHOTO/JOHN MINCHILLO

MANILA, Philippines—Philippine officials in the United States are investigating the reported exploitation of Filipino immigrants at several 7-Eleven convenience stores in two East Coast states under a scheme likened to a “modern-day plantation system” where their wages are withheld and their employment concealed under stolen identities.

Nine store owners and managers were charged on Monday in the scheme to exploit immigrants from Pakistan and the Philippines, in part by paying them using the stolen Social Security numbers of a child and three dead people, according to the Associated Press (AP).

Most of the defendants were arrested early Monday as US federal authorities raided 14 franchise stores on Long Island, New York, and in Virginia.

Immigration and customs enforcement agents were executing search warrants at about 30 other stores across the US suspected of similar infractions, authorities said at a news conference in Brooklyn.

The Philippine Embassy in Washington and the Philippine Consulate General in New York are looking into the AP report, Elmer Cato, embassy press officer, said in a statement sent to the Inquirer on Tuesday.

Federal indictments naming eight men and one woman allege that since 2000 they had employed more than 50 immigrants who didn’t have permission to be in the United States.

The defendants tried to conceal the immigrants’ employment by stealing the identities of about two dozen people—including those of the child, the dead and a Coast Guard cadet—and submitting the information to the 7-Eleven payroll department.

When 7-Eleven’s headquarters sent the wages for distribution, the employers stole “significant portions” of the workers’ pay, authorities said.

The defendants also forced the workers to live in houses they owned and pay them rent in cash, they added.

“The defendants not only systematically employed illegal immigrants, but concealed their crimes by raiding the cradle and the grave to steal the identities of children and even the dead,” US Attorney Loretta Lynch said in a statement.

“Finally, these defendants ruthlessly exploited their immigrant employees, stealing their wages and requiring them to live in unregulated boarding houses, in effect creating a modern-day plantation system,” Lynch added.

The US government seized the franchise rights of 10 stores in New York and four stores in Virginia. The stores will remain open under the parent company’s operation.

Immigration officials detained 18 workers, including some who first notified authorities about the alleged fraud.

The defendants were to appear in court on Long Island and Norfolk, Virginia, later in the day to face wire fraud conspiracy, identity theft and alien-harboring charges. They face up to 20 years in prison if convicted of conspiracy.

A 7-Eleven spokesperson said the company was cooperating with the investigation, but declined further comment.

In the past two years, federal authorities have brought similar charges against more than 500 business-owners and managers, said James Hayes, head of Immigration and Customs Enforcement’s New York office.

“There’s real teeth to these laws, and we’re using them now more than ever before,” Hayes said.

Chipotle Mexican Grill Inc. also came under investigation in recent years for hiring workers who were in the country illegally.

Haeyoung Yoon, senior staff attorney for the National Employment Law Project, said low-wage employers were more prone to not having the proper documentation for their workers.

Once the fraud is exposed, the workers typically end up getting fired on the spot and sometimes deported, Yoon said.—Reports from Tarra Quismundo in Manila and AP