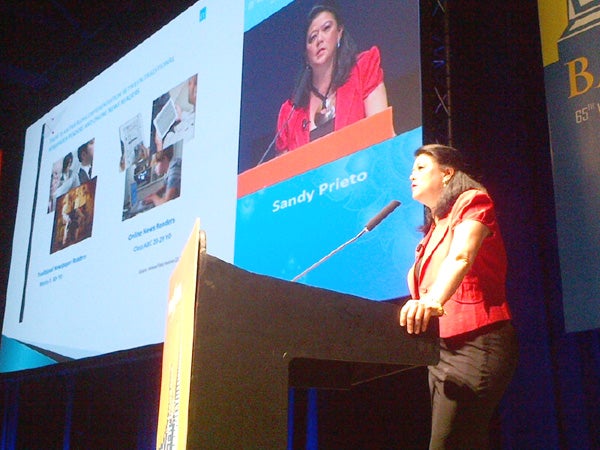 STATE OF PHILIPPINE MEDIA. Sandy Prieto-Romualdez, Philippine Daily Inquirer President and Chief Executive Officer, speaks before publishers and editors from all over the world about the current state of Philippine media. MATIKAS SANTOS/INQUIRER.net

“Reach is maximized by utilizing all available media,” said Romualdez, one of only two women speakers in the four-day 65th World Newspaper Congress that started June 2. The other was Prime Minister Yingluck Shinawatra who spoke before the gathering of press and advertising executives Tuesday.

“We have started looking at ourselves as specialists rather than generalists. We’re not mass media but a niche in being able to engage different audiences,” said Romualdez in a speech focusing on Asian Media.

In her slide presentation, Romualdez showed the expansion of the Inquirer over the years — from a print medium for the AB and Broad C market and with tabloids Bandera and Libre for the D and E markets to a multimedia group of companies that now include the INQUIRER.net for Filipinos abroad, Radyo Inquirer and its latest offering, news on buses via the Inquirer Catalyst Media.

Romualdez also talked about engaging Inquirer readers on social media and via a feedback system at the end of every article on INQUIRER.net.

“We want to be able to see a situation where the Inquirer brand is on top. At the same time, we want to do it in such a way where we can be able to manage the cannibalization,” said Romualdez in response to a question after her speech about how the paper managed its expansion.

But at the same time, Romualdez said that “as you multitask and multiplatform, you have to do it in a managed way and learn to adapt quickly”.

Aside from Romualdez, invited to speak were Azrul Ananda, President and Director of the Jawa POS in Indonesia, Jeongdo Hong, Vice President, JoongAng Media Network, and Supakorn Vejjajiva, President and COO, Post Publishing of Thailand.