PH should seek US help in sea dispute – Suarez

MANILA, Philippines – House minority leader Danilo Suarez on Wednesday said that the administration should seek the United States’ help in strengthening its claims in territorial disputes. 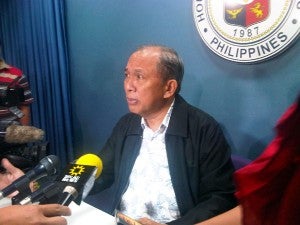 “The problem of a weak nation is that it is always subject to abuse,” he told reporters in a press briefing at the House of Representatives.

“You must remember, we have just ratified our defense treaty with them a week ago. We have been asking them for help. We want to know if they are indeed our ally,” said Suarez.

The Philippines has been embroiled in a territorial dispute with China over the West Philippine Sea and the minority leader said that they were concerned with reports that Chinese ships were deployed near Ayungin Shoal.

The Department of Foreign Affairs (DFA) has earlier reiterated its stand on its ownership of Ayungin Shoal, telling China that it had no right to dictate what the Philippines can and cannot do within its territory.

While he said that they were for a “peaceful and diplomatic resolution to the territorial disputes in the West Philippine Sea”, Suarez said that the Philippines needed the help of the US.

The minority leader said he felt that “booting out the American bases” had been a “strategic error in the part of the legislators.”

He said that it might be a good time to consider changing the Constitution and bringing back the US bases into the country.

“Notice that after we threw them out, their aids have been insignificant,” said Suarez.

“With provocative neighbors, our country has no umbrella of support or protection,” he said.