Myanmar democracy ‘not as good as you think’, says ‘Pen’ awardee 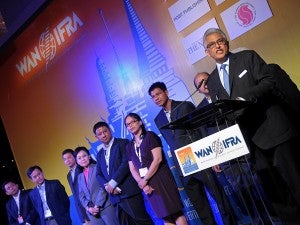 BANGKOK, Thailand — Dr. Than Htut Aung from Myanmar was presented the Golden Pen of Freedom Laureate 2013 here at the World Association of Newspapers and Publishers Monday.

Dr. Aung, chairman and CEO of the Eleven Media Group in Yangon, accepted his award for his “struggling people” who continued to live in “fear”.

In his speech before over 1,000 delegates to the 2013 World Newspaper and Publishers Congress, Aung said that as a journalist, he has a responsibility and admitted that while “freedom was in front of me after five decades of my life, our transition from a dictatorship to a democracy wasn’t as good as you think”.

Aung, who was imprisoned under the dictatorship, alongside another freedom icon, Aung San Suu Kyi, said that accepting the award from his international colleagues meant that he wasn’t alone in this struggle.

Erik Bjerager, president of the World Editors Forum, presented the award to Aung.

Earlier in the day, Deputy Prime Minister Kittirat Na Ranong, welcomed the participants with his opening address focusing on the challenge of new technology and accountability of freedom of the press.

It officially opened Monday with all the pomp and pageantry, highlighted by video presentations on Bangkok, WAN-IFRA and on Aung.