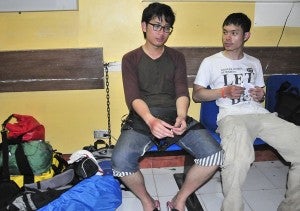 Thai nationals Nithi Ruangpisit, left, and Tanut Ruchipiyarak, rest in a hospital in Legazpi city with their mountain climbing gear after surviving a steam-driven explosion of Mayon volcano, one of the Philippines’ most active volcanoes, Tuesday, May 7, 2013. AP PHOTO/NELSON SALTING

4 a.m.—George Cordovilla’s group of nine people, including five Thais, start their climb on Mayon via Sto. Domingo, Albay, with a plan to stay overnight and to descend the following morning.

1 a.m.—Cordovilla group reaches Mayon’s crater, puts up camp some 1,400 feet from the crater.

4 a.m.—Calleja group prepares to hike from Camp 2 to Camp 3 at the summit, but rain prevents this.

12:20 p.m.—Strohberger and Bernard Hernandez are rescued, followed an hour later by Kenneth Jesalva, both guides.

5:30 a.m.—Army team locates fatalities at the “Rabbit’s Ear” near the crater.

Read Next
Mayon tour guide says he risked his life to save Austrian
EDITORS' PICK
Defend Your Health! Shop health essentials from home with Rose Pharmacy’s Online Sale
COVID-19 wards in 2 more hospitals reach full capacity
Navotas will be on lockdown from July 16 to 29 – Tiangco
Water remains our saving grace right now
World-standard accounting: Unlocking your financial potential
Chatting with companions, answering calls on MRT 3 trains banned
MOST READ
Vilma Santos-Recto ‘prepared’ to face ‘consequences’ over ABS-CBN franchise vote
‘I am not my father,’ says daughter of lawmaker who voted to deny ABS-CBN franchise
Did a meme get on Agot Isidro’s nerves? She’s asking ’24 Oras’ to fact-check it
In slap on face of PH, China replies to Locsin on tribunal ruling: It’s invalid
Don't miss out on the latest news and information.