Mayon tour guide says he risked his life to save Austrian 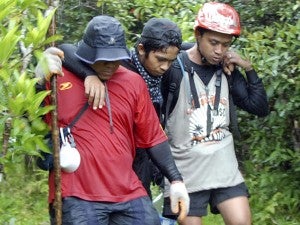 Rescuers assist Nicas Mabao, center, after surviving a steam-driven explosion of Mayon volcano, one of the Philippines’ most active volcanoes, Tuesday May 7, 2013 in Albay province. Mabao said he was thankful he not only survived but was also able to save the life of an Austrian tourist. AP PHOTO/NELSON SALTING

LEGAZPI CITY, Philippines—“I did what I can.”

Nicanor Mabao, 18, was thankful he not only survived but was also able to save the life of an Austrian tourist when Mayon Volcano erupted and killed four German climbers and a fellow tour guide.

Over the last two years, Mabao said he was with the Panaway Mountaineer Group, working as a tour guide three to four times a week for groups climbing the volcano.

He began doing this at the age of 16.

Mabao was with four other guides in his group—Roel Llanera, Bonifacio Deblois, Kenneth Jesalva and Jerome Berin assisting Germans Joanne Edosa, Roland Pietieze, Farah Frances and Furean Stilfer and Austrian Sabine Strohberger on a climb to Mayon when the explosion occurred at 8 a.m.

There were five in the climbing team who perished in the hot rock slide that ensued, tour guide Berin and “the two German couples,” said Mabao.

Mabao, who completed three years of college studies as an agriculture major at Bicol University College of Agriculture and Forestry in Guinobatan, Albay, said he risked his life to save Strohberger.

Strohberger, 32, stepped on loose rocks and would have slipped had Mabao not grabbed her bag slung on her shoulders and lifted her to safety.

Mabao said he was also able to catch another German, but the man fell dead, along with the four other fatalities. He felt for their pulse. They were gone. The surviving five climbers made their descent to safety.

With the retrieval on Wednesday of the missing Thai national and recovery of the five dead, rescue operations were terminated.

“We are now just waiting for their arrival,” said Cedric Daep, head of the Albay Public Safety and Emergency Management Office.

“All are accounted for. Everyone is moving downwards and the waiting time is now decreasing,” he said.

According to him, Thai national Boonchai Jattupornong, 35, might arrive before midnight on Wednesday, earlier than the five dead.

Daep said the team would try to bring all the five bodies to Legazpi on Wednesday, if not, Thursday.

Jattupornong was found by the rescue team around 3:07 p.m. on Wednesday, a few meters above Camp 2. He has a broken right arm, burns in his body, neck and back and could barely walk.

Earlier on Wednesday, Army soldiers recovered the bodies of four Germans and one local tour guide.