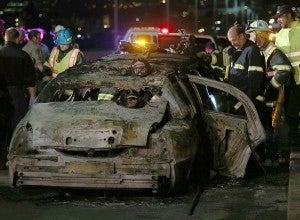 San Mateo County firefighters and California Highway Patrol personnel investigate the scene of a limousine fire on the westbound side of the San Mateo-Hayward Bridge in Foster City, California, on Saturday, May 4, 2013. Five people died, including newlywed Neriza Fojas, when they were trapped in the limo that caught fire. AP PHOTO/OAKLAND TRIBUNE-BAY AREA NEWS GROUP, JANE TYSKA

CAMILING, Tarlac—Neriza Fojas died in a limousine blaze in California but the fire she left in the hearts of her parents is the love of a conscientious and dutiful daughter whose zest for life is best remembered in her well-organized scrapbooks.

Fojas was killed on Saturday when the limousine carrying her during a night out with friends in California to celebrate her civil wedding caught fire. Four of her companions, all Filipinos, died.

The volume about Fojas’ life as a nursing student starts with the Jan. 14, 2002, issue of the Philippine Daily Inquirer. The clipping was an advertisement of Centro Escolar University, where she was then a senior. Wearing a pink nurse uniform, she was chosen for the ad because she was the college muse.

Fojas, 31, also had a separate volume about her participation in beauty contests, from her “discovery year” as Miss Sportsfest in high school, to being Miss Lions Club to being first runner-up in the annual Miss Camiling pageant.

On these pages, she typed what could have been her way of introducing herself in these pageants: “From the native town of Leonor Rivera, the famous Maria Clara… CAMILING. I am Neriza Fojas.”

“She put these albums together before she left for the United States [in 2005],” said her mother, Sonia. “She never tired of doing this.”

There are missing photographs in the albums—those taken during school recognition programs where she received academic honors.

“These photos were removed because they would be included in the video presentation being prepared for the wedding,” her mother said. “We did these through Skype, I would flip through the album and she would tell me which ones to get.”

“She always called,” said her father, Carlito. “The last time we talked was Saturday before she died but it was a quick talk because we were on a bus then. But the day earlier, on Friday, we talked through Skype and she showed us her pasalubong (homecoming gift). She bought me a shirt and her Nanay, a bag,” he said.

“It was the last time she would greet me. When she showed me the bag through Skype, Neriza greeted me with advanced Happy Mother’s Day,” her mother said.

Fojas was scheduled to come home on June 2 for her June 19 church wedding in Batangas.

“All my three children are very good children. But as Neriza was the youngest, she was always there,” Carlito said.

After graduating from CEU, Fojas started working on her travel papers and examinations that would allow her to work in the United States, following in the footsteps of her older sister, also a nurse in Hawaii.

When the couple retired—Carlito from the Philippine National Bank as a cashier, and Sonia as a Department of Agriculture technician—their daughters took them to the United States.

Carlito said what happened to Neriza was painful. “We just think that she’s in California, working so we won’t feel that she’s gone.”

Wednesday was Camiling’s town fiesta and as the parade of muses passed by their house, the Fojas couple were once more reminded that sometime back, it was their daughter who waved to the crowd as one of the town’s prettiest.

Inside their home, a portrait of their daughter is on an altar with white roses and candles. A novena is offered every day for the repose of her soul. Friends and relatives continue to pour in to sympathize and condole with the family.

“What is most painful is that we can no longer see the remains of our daughter. She is coming home in ashes,” Carlito said.