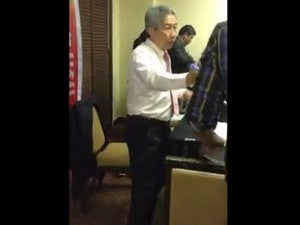 Jose Ampeso, the Philippine consul general to Vancouver, as shown in the video posted on YouTube: So sorry. Screen grab from www.youtube.com

MANILA, Philippines—He is sorry for behaving the way he did, but said he was unjustly provoked during a very tiring day at work.

Jose Ampeso, the Philippine consul general to Vancouver, apologized Thursday for any offense his videotaped rant may have caused but gave the excuse that he was provoked by a Filipino-Canadian offering “to give a measly dollar” to his mission’s fund drive for typhoon victims in the Philippines.

“The video alone is not sufficient to draw any reasonable conclusions from, one way or the other. Hence, it is unfair and unjust to use it to malign my character,” said Ampeso, a career diplomat for the past three decades, serving in various overseas posts.

In a statement on Thursday, Ampeso claimed the 28-second video “does not tell the whole story” about his run-in with a Filipino who was applying to renew his passport during the Vancouver mission’s passport renewal outreach program in Alberta, Canada, on April 19.

Ampeso said the passport applicant “insulted me and poked fun at being requested to make a donation to the Philippine National Red Cross (PNRC).”

“That’s why I became so agitated while explaining to him that if he had to give anything at all, it has to come from the heart for the typhoon victims. It was purely voluntary,” he said.

“And definitely, it was not a requirement for a passport application or rendition of any other consular services, contrary to what some allege. Thus, any allegation or insinuation that we were forcing people to give is entirely untrue,” he said.

The passport applicant, the Edmonton-based Proceso Flordeliz Jr., wrote an account of his encounter with Ampeso in a Filipino online forum. He said Ampeso became angry when he offered to donate only a dollar to the fund-raiser, and threatened to disregard his passport renewal application.

The 28-second video clip, captioned “Rude, arrogant, drunk consul. More fun in the Philippines!,” was posted on the YouTube video-sharing website, inviting widespread comment and the recall of Ampeso by the Department of Foreign Affairs (DFA).

But was he drunk?

Ampeso denied being rude or arrogant at the event. His statement, however, did not address the question of whether or not he was drunk.

“Please take note that this incident took place at about 4 p.m. I was visibly tired after continuously assisting hundreds of passport applicants in the front of the line that afternoon, ending in fact until 10:30 p.m. on that day,” he said.

He said he instructed a volunteer to help Flordeliz despite their earlier confrontation.

“Be that as it may, I apologize to anyone whom I may have offended. I assure you that I had only the best intentions in reacting in that manner,” Ampeso said.

The DFA said it had recalled Ampeso to the home office to explain his behavior. He is due to arrive in Manila early next week.

DFA spokesman Assistant Secretary Raul Hernandez said the collection of voluntary donations from members of the Filipino community was a common practice among Philippine missions abroad, especially during times of calamities.

Ampeso explained that funds collected during the Alberta outreach program “are fully recorded” and “will be remitted soonest in full to the PNRC.”

The Alberta incident is not the first time that Ampeso has had a brush with controversy. Luli Arroyo, the daughter of former President Gloria Macapagal-Arroyo, accused Ampeso of sexual harassment when the Philippines hosted the Asia-Pacific Economic Cooperation leaders’ summit in 1996.

Ampeso also denied the allegations. The administrative charges were dropped after the diplomat apologized to Arroyo both in writing and in person.