Ballots sent out to overseas voters for May elections 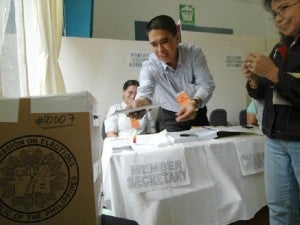 The consulate is asking registered voters to carefully go over the instructions on how to use the ballots for the Senate and Party-List elections and mail them to the Philippine Consulate General in San Francisco as soon as possible.

Consul General Marciano A. Paynor Jr. also announced that upon representations made by the Global Filipino Diaspora Council, the Comelec has allowed registered voters who failed to vote during the 2007 and 2010 elections to vote this year.

Under the current Comelec guidelines, these voters should “manifest their intention to vote” for the 2013 elections by presenting themselves at the Philippine Consulate General and signing the voters list. They are allowed to do so vote until 4:00 a.m. of May 13, 2013.

“Our kababayans are once again given this opportunity to participate in a major political exercise in the Philippines,” said Paynor. “We call on all registered Overseas Voters to exercise their right to vote and take an active part in selecting our country’s leaders.”