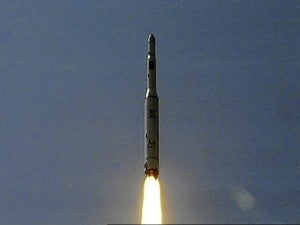 In this April 5, 2009 image made from KRT video, a rocket is lifted off from its launch pad in Musudan-ri, North Korea. AP FILE PHOTO

SEOUL—Findings from a report by the US military spy agency suggest North Korea could be capable of launching a ballistic missile with a nuclear warhead. The Pentagon and South Korea’s defense ministry have cast strong doubts on the assessment.

What do we know for sure?

Not a great deal.

North Korea has conducted three nuclear tests, in 2006, 2009 and 2013. The 2013 underground test was by far the most powerful. But the radioactive fallout was well contained.

Numerous experts believe it may have been a uranium bomb, rather than a plutonium device as used in the previous two tests.

North Korea has only successfully tested one medium-range ballistic missile, the Rodong-1, with a range of 1,300 kilometers.

In December, the North successfully put a satellite into orbit with its Unha-3 long-range rocket.

What does North Korea claim?

The North Korean military says it already has an intercontinental ballistic missile (ICBM) capability and can accurately deliver a nuclear warhead to targets as far away as the continental United States.

Pyongyang said the February 2013 test was of a “miniaturized” device and that it now had a “diversified” weapons capability—suggesting both uranium and plutonium bombs.

What is the expert consensus?

Nearly all experts agree that North Korea is years from developing a genuine ICBM capability.

The issue of miniaturization is more debated. A few experts believe Pyongyang may have already mastered this technique, but the majority believe it would require one or two more tests to develop a working warhead that could fit on a missile.

Delivery system capability is highly speculative. Even at the midrange level, the North’s ballistic missile record is extremely shaky.