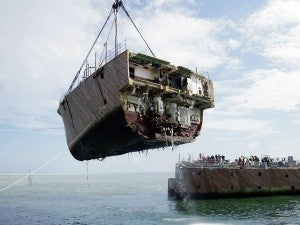 In this photo taken on Tuesday, March 26, 2013 and released by the Philippine Coast Guard in Manila, on Wednesday, March 27, 2013, the bow of the USS Guardian, a US Navy minesweeper, is lifted by a crane during a continuing salvage operation off Tubbataha Reef, a World Heritage Site in the Sulu Sea, 640 kilometers (400 miles) southwest of Manila, Philippines. The ship ran aground before dawn on Jan. 17, damaging coral reef. AP Photo/Philippine Coast Guard

MANILA, Philippines—Salvage teams on Saturday removed the last piece of a US Navy ship that was stuck on a Unesco World Heritage-listed coral reef in the Philippines for more than 10 weeks, the coast guard said.

The stern of the USS Guardian was lifted off the Tubbataha Reef after the 68-meter (223-foot) vessel was sliced into portions for easier removal, Philippine Coast Guard spokeswoman Lieutenant Greanata Jude said.

Bad weather had earlier delayed the recovery operations but once the skies cleared, a salvage ship used a huge crane to lift the bow, the deck, the funnel and other pieces of the ship off the reef.

“The salvage ship will still remain in the area. After the lifting, they will clear the area of debris. It will take three days maximum,” Jude told Agence France-Presse.

The minesweeper ran aground on Tubbataha in a remote part of the Sulu Sea on January 17, damaging a section of the reef, a Unesco World Heritage site known for its rich marine life.

The incident sparked widespread condemnation across the Philippines, a former US colony.

The US government has apologized for the accident, which it initially blamed on faulty maps. The Philippines said it would impose fines.

Due to fears that towing it to deeper waters would inflict more damage on the reef, the US government agreed to scrap and dismantle the Guardian, which was worth about $277 million.

A team from the Philippine government and major universities has already been assembled to assess the damage caused when the ship ran aground, said Tubbataha Reef marine park superintendent Angelique Songco.

Under Philippine law, ships that run aground on Tubbataha are fined P24,000 ($585) for every square meter of damaged reef, she said.

She said the area of the reef damaged by the USS Guardian has been initially estimated at 4,000 square meters (43,055 square feet) but the assessment team will still check this.

“We will inspect the total damage to establish exactly what they have to pay,” Songco said.