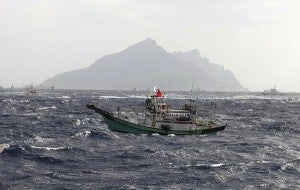 In this photo released by Taiwan’s Central News Agency, a Taiwanese fishing boat comes close to the disputed islands called Senkaku in Japan and Diaoyu in China, in the East China Sea, Tuesday, Sept. 25, 2012. On Tuesday morning, about 50 Taiwanese fishing boats accompanied by 10 Taiwanese surveillance ships came within almost 20 kilometers (about 12 miles) of the disputed islands- within what Japan considers to be its territorial waters. APfile AP FILE PHOTO/Central News Agency/TAIWAN OUT

TAIPEI– Taiwan’s President Ma Ying-jeou on Saturday unveiled two new ships that will join the patrol in waters off disputed islands in the East China Sea at the center of a regional territorial row.

“We will gradually build up our capabilities in the sea to enforce the law, to conduct rescue missions and protect fishermen,” Ma said before boarding a new ship to inspect a drill off the Kaohsiung port in the south.

Taiwan will not “concede one step” in upholding its sovereignty claim over the islands, Ma said, while urging all sides involved to seek a peaceful resolution to the dispute.

The contested islands, in an area where the seabed is believed to harbor valuable mineral reserves, are claimed as the Senkakus by Japan and the Diaoyus by China. The Japanese-controlled islands are also claimed by Taiwan.

In January, coastguard vessels from Taiwan and Japan converged and duelled with water cannons in their latest stand-off as a boat carrying Taiwanese activists was heading to the islands.

The incident came at a time of growing regional concern over the intensified friction over the islands between China and Japan, with both Beijing and Tokyo recently scrambling fighter jets to assert their claims to the area.

Coastguard vessels from Japan and Taiwan also exchanged water cannon barrages in September after dozens of Taiwanese boats were escorted by patrol ships into the islands’ waters.

Japan’s government nationalised three of them in September by taking them out of private Japanese ownership, triggering strong protests from Taiwan and China.