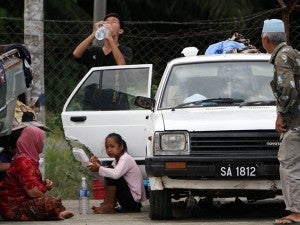 The Philippine National Disaster Risk Reduction and Management Council said it had recorded 4,983 adults and children who had arrived in the south of the archipelago after fleeing Sabah due to the ongoing fighting.

Paslur Abdullah, executive director of the government centre in charge of caring for the new arrivals, said the total was likely to be higher as many would have returned without registering.

“They arrive on small vessels. Some of them disembark without registering and they are met by relatives. We cannot detain them,” he told Agence France-Presse, adding that it was not known if any of the invaders were amongst those fleeing.

The Filipinos began arriving in early March after clashes broke out between Malaysian forces and followers Sultan Jamalul Kiram III, who claims Sabah as his territory.

Some 200 followers of Kiram, some of them armed, arrived in Sabah in February in an attempt to claim the Malaysian state for the sultanate, reviving a centuries-old territorial row.

The incursion and a Malaysian counter-assault has left more than 60 militants dead along with 10 security personnel, according to Malaysian authorities.

President Benigno Aquino has previously expressed concern that the unrest in Sabah might displace the estimated 800,000 Filipinos working there.