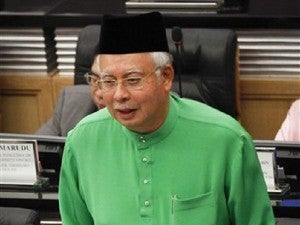 Prime Minister Najib Razak’s announcement appeared to indicate a recognition that an armed invasion by more than 200 armed fighters had exposed deep-seated security problems in the eastern state of Sabah near the southern Philippines.

“The primary cause of the invasion of terrorists … is the existence of settlements considered easily exposed to the danger of infiltration by illegal immigrants and stateless persons,” Najib said.

He added relocations would affect areas near the invasion site but could be expanded to the entire state, which for centuries has had a porous sea border with the southern Philippines.

Armed followers of a self-styled Philippine sultan landed in Sabah six weeks ago to claim the state for their leader.

The incursion and a Malaysian counter-assault have left more than 70 dead – mostly invaders – according to authorities, and put rare stress on relations with Manila.

Najib gave no further details on the relocation plan.

However, the move could add to scrutiny of the Malaysian government’s policies in the state and whether they had facilitated immigration by large numbers of foreigners with questionable national loyalties.

There are an estimated 800,000 Filipinos living in Sabah, whose total population is just over three million.

Sabah natives have long grumbled over an influx of Filipino Muslims in recent decades. Critics accuse the government of encouraging the flow to shore up electoral support for the Muslim-dominated central government.

The government denies the allegation.

Malaysian forces launched an assault three weeks ago to crush the insurgents and claim to have killed more than 60. Ten security personnel also have died.

But the government has released only sketchy details on the operation and have indicated they were struggling to stamp the invaders out amid fears militants may have melted away into area populations with the support of locals.

They were among more than 100 arrested – apparently Malaysian residents – on suspicion of complicity in the incursion.