Abus got only P4M from us, says wife | Global News
Close
menu
search

Abus got only P4M from us, says wife 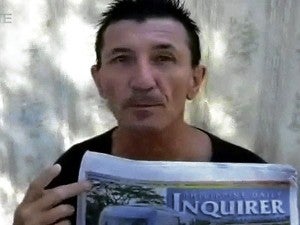 The Filipino wife of freed Australian kidnap victim Warren Rodwell on Sunday said the Abu Sayyaf bandits got P4 million in ransom and not P7 million as an unnamed official claimed on Saturday.

Miraflor Gutang, Rodwell’s Filipino wife, said she was sure about the amount of the ransom because she personally handed the money to her cousin (not brother as reported earlier), Roger Gutang, who delivered it to Puruji Indama, a commander of the Abu Sayyaf bandit group.

“We gave only P4 million and not P7 million,” she said.

In a talk with the Inquirer on Saturday after Rodwell’s release, Basilan Vice Gov. Al Rasheed Sakalahul, who helped in the negotiations for the former Australian soldier’s freedom, denied the information that the ransom was P7 million.

Sakalahul came forward on Saturday to deny reports in Manila quoting an unnamed official as saying that P7 million was paid for Rodwell’s freedom and that “local officials and middlemen” had pocketed some of the ransom.

Sakalahul said the ransom was P4 million and he was sure about that because he was there when Roger Gutang handed the money to Indama and it was counted in front of him.

Miraflor Gutang on Sunday acknowledged that the kidnappers had demanded P7 million. “But I told them Warren and I could only raise as much as P4 million,” she said.

Sakalahul on Saturday said he succeeded in getting the Abu Sayyaf to reduce the sum to P4 million.

She said she was forced to sell their house in Pangi, water refilling station and vehicle, and asked for help from her relatives abroad to raise funds.

“No one from our government or from the Australian government extended help to raise money for the ransom. We alone raised the money,” she said.

The Philippine and Australian governments have strict policies against paying ransom. On Sunday Malacañang, the police, and the military stayed away from reports about ransom being paid for Rodwell’s freedom.

“The policy of the government remains that we do not pay ransom,” deputy presidential spokesperson Abigail Valte said on state radio dzRB.

“We are not privy (to the reported negotiations). The government has a no-ransom policy. We don’t know where that supposed report of negotiations and payment of ransom came from,” Cerbo said.

Col. Arnulfo Burgos Jr., Armed Forces of the Philippines spokesperson, said the military did not know about the payment of ransom.

“The AFP has no information on that,” Burgos said.

He said the AKG would debrief Rodwell after his discharge from hospital.

On Dec. 5, 2011, Abu Sayyaf bandits posing as policemen barged into Rodwell’s house in Ipil town where he lived with Miraflor, kidnapped him and took him by speedboat to some island farther south where the al-Qaida-linked bandits operated.

Sakalahul, who had played a key role in the release of other kidnap victims in Mindanao, said Gutang’s family asked him to help obtain Rodwell’s release.

“I told them that I would try my best to help them and thank God that we succeeded in bringing Rodwell out alive,” he said in a report published in the Sydney Morning Herald on Sunday.

The kidnappers had made clear in a video posted on the Internet four months ago they would execute Rodwell “in an unusual way” if a ransom was not paid for his release.

Beheading their victims, particularly non-Muslims, has become a trademark of the Abu Sayyaf.

“If you have concerns for your man, we will give you a chance to save his life before it’s too late,” one of the kidnappers said in the video.

He said the negotiations were conducted with an emissary of Indama, an Abu Sayyaf commander in Basilan notorious for beheading and mutilating victims.

“It was really a tough negotiation but in the end, with God’s help, we managed to secure the release of Rodwell,” Sakalahul said.

After traveling by boat from Tawi-Tawi, they put him in a boat in waters off Pagadian and left him to go ashore by himself.

Though weak, Rodwell had to paddle the boat to shore. But the tide was out and he had to get off the boat and wade through the mud to reach safety on shore.

Nathaniel Tampos, wharf supervisor at the Port of Pagadian, spotted the mud-spattered and soaked Rodwell wading ashore toward the fisheries building in darkness and asked him if he was a tourist.

“No, I’m not a tourist. I am a kidnap victim. Please help me,” Rodney replied, according to Tampos.

Tampos took Rodwell to the nearby headquarters of the maritime police where Insp. Eurem Macasail offered him a cup of coffee.

The emaciated Rodwell was so weak he could barely bring the cup to his lips, Macasail said.

He said Rodwell told him some of his experience, like how his captors had repeatedly transferred him from one small island to another to elude pursuit.

During his captivity, he was not shackled or caged but was always closely watched by his captors.

“He said he had several opportunities to escape but was not successful. They would open fire and force him to stop,” Macasail said.

Rodwell was taken to the military’s Western Mindanao Command hospital in Zamboanga City for medical checkup and treatment on Saturday.

His sister Denise was traveling to Manila on Sunday to see him, according to report published in The Australian newspaper Sunday.

His cousin Susan said the family was looking forward to getting him back to Australia, the report said.

Gutang said she had not seen or talked with her husband since he was released.

“I was told he was in the American camp, as that was the agreement between the Australian embassy and the US,” Gutang said. With reports from TJ Burgonio and Marlon Ramos in Manila; AFP, The Australian and Sydney Morning Herald