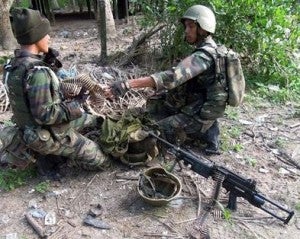 MANILA, Philippines—After more than a month of military operations against forces of the sultan of Sulu, Malaysian authorities have declared the crisis in eastern Sabah “under control,” Malacañang reported on Sunday.

National Security Adviser Cesar Garcia, quoting Malaysian authorities, said police operatives were now conducting a “small unit” operation against the remnants of Agbimuddin Kiram’s group, who were believed to have broken up into small groups in Lahad Datu town.

“It’s a small unit operation. That’s how it is right now. They think the group has broken into small groups and scattered to different villages,” Garcia said in an interview by phone.

Malaysian security forces and the Sulu royal army clashed anew in Tanjung Batu in Lahad Datu on Sunday, during which four people, including two children, were killed and two others, a soldier and another boy, were wounded.

Malaysian Armed Forces Chief Gen. Zulkifeli Zin said in a news conference that the boy was airlifted to a hospital and the bodies of the four people with Filipino ancestry were taken to a morgue.

He said Malaysian security forces entered a house in Tanjung Batu around 9:15 a.m. as they tailed “two terrorists” but they were fired upon instead, prompting them to retaliate.

On March 19, the Malaysian authorities downgraded the alert level from red to amber in Lahad Datu, more than a month after Agbimuddin and members of the Sulu royal army launched an offensive to press their claim on Sabah, according to Garcia.

The alert downgrade would indicate that “they’ve got the situation under control,” he said.

The downgrade came after the arrest of an alleged top commander of the Sulu sultan’s forces and his wife.  Malaysia identified the new captives as Amirbahar Hushin Kiram, 50, and his wife, Gina Teves, 47. They were reported arrested in a marshy area in Kampung Sri Melor Bugaya, Semporna, last Saturday.

So far, Garcia said, he had no direct information if Amirbahar and his wife were part of Agbimuddin Kiram’s group.

But for more than a week now, the Sulu royal army has not launched any attack against Malaysian security forces.

Malaysian police deputy chief Khalid Abu Bakas told a Sabah-based radio station that the “Sulu terrorists” had become leaderless with the arrest of Amirbahar and the death of one Commander Musa more than two weeks ago.

Malaysia also announced it had filed terrorism and rebellion charges against eight persons arrested in Lahad Datu and investigations were ongoing into the possible participation of over 100 more detainees.

Garcia said the government had received conflicting reports—either he was still in Lahad Datu or he had slipped back into the Philippines. “The Malaysians are convinced that he’s still there,” Garcia said, quoting news reports from Malaysia.

The reported defeat of the sultan’s offensive to reclaim Sabah, however, was denied by Agbimuddin’s son-in-law, Danilo Datu Abdullah Virtudazo.

Virtudazo told the INQUIRER in Cagayan de Oro City that the Sulu royal army was “merely in a defensive stance in deference to a ceasefire declared by Sultan Jamalul Kiram III based on a recent letter of appeal from United Nations Secretary General Ban Ki-moon.”

“The sultanate respected the call for a ceasefire but Malaysia did not,” said Virtudazo, who is married to Agbimuddin’s fourth daughter, Dayang Mura Napsa.

Another spokesperson of the sultan, Abraham Idjirani, the sultanate’s secretary general, also cast doubt on the official statements of Malaysian authorities, branding them as propaganda “psy-war.”

Two of the eight alleged supporters of the sultan who were charged by Malaysian authorities with terrorism and rebellion (one Kalbi and Madzalie) were earlier reported killed during the March 1 clashes in Lahad Datu, Idjirani said.

“This is an integral part of the psy-war tactics of the Malaysians. Because they don’t want to bare the truth, they are using the names of dead people to support their lies,” Idjirani said over the phone.

Idjirani said they had also received information that the Malaysian government had sent additional troops, military tanks and helicopters to Lahad Datu to search for Agbimuddin and the remaining Sulu fighters.

As the Sabah crisis lingers, a descendant of the Sulu royal house, Rita Tuban of the state-run University of Southeastern Philippines in Davao City, urged the Sulu royals to retry the diplomatic way of settling the Sabah claim.

Tuban, who is known among Tausugs as Princess Jamala-Rah II, urged the government to facilitate a meeting of all Sulu royals so peaceful solutions could be agreed upon.

At a forum organized by Universiti Malaya on Friday, Julkipli Wadi of the University of the Philippines was reported to have urged Malaysia and the Philippines to find ways to immediately resolve the Sabah issue as it could create a larger problem, especially if a third party steps in. With reports from Germelina Lacorte and Bobby Lagsa, Inquirer Mindanao, and Marlon Ramos in Manila