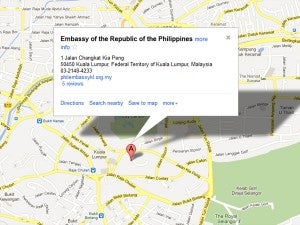 MANILA, Philippines—Malaysian activists held rallies in front of the Philippine Embassy in Kuala Lumpur on Thursday and Friday but the diplomatic mission’s operations remained normal because the demonstrations were peaceful, according to the Department of Foreign Affairs (DFA).

“The Philippine Embassy remains open, and its personnel committed to their work, in light of the peaceful and orderly rallies that were held in front of it in relation to the incidents in Lahad Datu and other places,” the DFA said.

On the afternoon of March 7, a 40-member group from the United Malays National Organisation (UMNO)-Youth held a brief rally in front of the embassy to which they handed a letter of protest.

The organizers stated that the gathering was not a protest against the Philippine government, but against Sultan Jamalul Kiram III, whose extradition to Malaysia they were seeking.

On Friday morning, representatives from nongovernment organizations numbering around 20 also held a rally in front of embassy, and also handed over a letter of protest.

In the afternoon, at an event called Ops Bunga (Operation Flower), a number of Malaysians brought flowers to the embassy gate as a gesture of peace.

The DFA said the embassy had put in place added security measures for the safety of its personnel and their families, its property and embassy clients and visitors.

Philippine Ambassador Eduardo Malaya and other embassy officials were in Sabah the past few days to monitor the conflict and attend to the needs of Filipinos there.

Teams from the embassy, with augmentation from the DFA and other government agencies, are in the Lahad Datu and Semporna/Tawau areas on a humanitarian and consular mission for the affected Filipinos.

“The secretary general noted the efforts that were being made by the governments of Malaysia and the Philippines to find a peaceful resolution to the situation,” Ban’s office said in a statement posted on the UN website.

Lozano, in his three-page complaint-affidavit filed in the Office of the Ombudsman, said Del Rosario could be prosecuted under Article 225 of the Revised Penal Code, which punishes any officer “who shall remove, destroy or conceal documents or papers officially entrusted to him.”

Last Wednesday, Del Rosario took responsibility for the “missing” June 28, 2010, letter which he said had been found in the foreign office’s keeping.