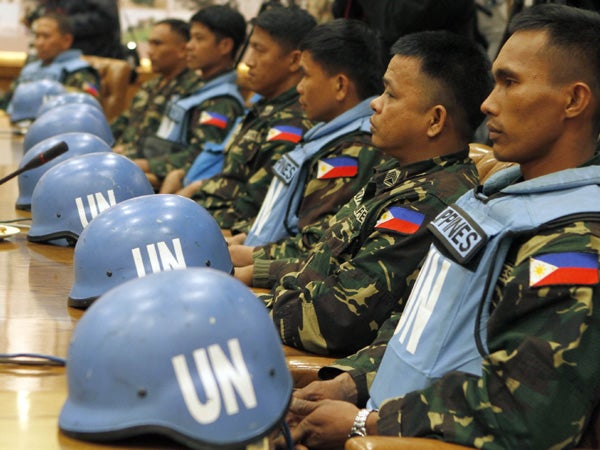 Some of the 21 Filipino United Nations (UN) peacekeepers at the press conference upon their arrival at Jordanian Army Headquarters in Amman Jordan Saturday March, 9, 2012. AP

MANILA– The Philippine government on Sunday welcomed the release of its 21 UN peacekeepers after they were freed by Syrian rebels and crossed to Jordan, where officials waited to receive them.

The troops, members of a UN force monitoring a 1974 ceasefire between Syria and Israel, were abducted on Wednesday.

Military spokesman Colonel Arnulfo Burgos said the peacekeepers’ battalion commander and one of the freed officers had personally confirmed by telephone that they were in Jordanian custody.

He said the group’s commander had already met with the freed men, adding that they would be staying in a hotel in Amman for two days before being transferred back to the UN Disengagement Observer Force (UNDOF).

The Philippine Department of Foreign Affairs also stressed the impartiality of the UNDOF the men were serving with and called on all parties to respect their freedom of movement and safety.

The hostages were part of a 300-member Philippine Army force deployed with the force since November last year.