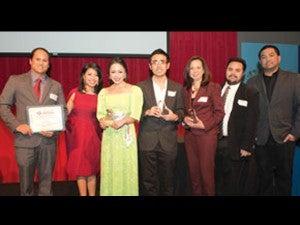 PASADENA, California – Filipino Americans were among ethnic media practitioners in Southern California who were recognized on Thursday night for excellence in journalism, and insightful coverage on ethnic community issues.

Although the venue was nearly up to maximum audience capacity, the classy interiors of the Forum gave the awards night an intimate and dignified feel to it.

Over 150 entries were submitted to NAM for consideration in print and broadcast journalism.

However, only 25 entries were selected as winners, with a handful others being cited as runners-up and honorable mention awardees.

“From the beginning, we were so grateful and so privileged that we received more than 150 individual entries from a wide range of ethnic media outlets,” said NAM Awards Chairperson for California Odette Keeley.

According to Keeley, the diverse selection of participants included media outlets in ethnic communities like the African Americans, Latinos, Middle Eastern, Armenian, as well as the whole range of Asian American groups, including Filipinos.

Keeley noted that the winning stories had a profound impact on the people who attended Thursday night’s gala.

“Everyone was riveted and struck by how powerful these stories are,” she said.

Keeley also added that the 2013 NAM Ethnic Media Awards is a ‘very humbling process’ because it highlight the intersection between the different ethnic communities using the different stories that were presented at the gala night, and throughout the awards process itself.

Cora Oriel, president of Asian Journal Publications Inc. and one of the founding members, said that New America Media plays a significant role in educating the public and private sectors of society, on the importance of relevant and culturally sensitive news media organizations.

“Beyond the recognition of our existence and any financial benefits we might have garnered from corporate and government advertising, our true success is measured by the improvements in the lives of the marginalized members of our respective communities,” Oriel added.

A special award – the Community Advocate Award – was given to the Alhambra Source for their story, “Why Is Alhambra Stopping Churches From Housing Homless Families?” which led to a local outcry that resulted in the Alhambra City Council reconsidering its ban on sheltering homeless families at churches.

According to Sandy Close, executive director for NAM, ethnic media has a long tradition of being the frontline defenders of their communities — exposing wrongdoings and speaking out against injustices.

Close said that the Alhambra Source exemplified what it means to be an advocate for their community.

“This was a crop that we really are proud of,” Keeley said of the entries from Filipino media.  She said that there was an ‘incredible and rich’ representation of Filipino-American news and issues through the stories submitted.

“It really reflects how much the Filipino-American community has grown in its maturity, in empowering itself in the civic realm, in discovering those issues and really having a grasp on the issues that affect the community,” Keeley pointed out.

Four Filipino entries were among the winners in three different categories.

For Outstanding Community Reporting for Television, Jannelle So of LA 18 won for her entry “Human Trafficking Special: A 4-Part Series” aired on her TV show Kababayan LA. Her entry talked about modern-day human trafficking within the Filipino community. So dedicated her award to fellow media practitioners ,who worked with her on the story, and to her associate producer, Maureen Roque.

Under the same category of Community Reporting for Television, Asian Journal reporter Joseph Pimentel was cited as a runner-up winner for his report in Balitang America aired over The Filipino Channel.

Young Fil-Am journalist Ryan Macasero was cited as a winner under the category Emerging Youth Voices Award for his piece, “Young Journalist Opens Up About Overcoming Depression: The Asian American in Isolation.”

Macasero’s story touched on a sensitive issue: depression among Asian American youth.  By sharing his own experience, Macasero broke the silence on this important issue.

Aside from the four winners, other Filipino media practitioners were  also present at the gala, attending as finalists for the NAM awards.

In attendance were Steve Angeles and Yong Chavez for ABS-CBN, and this writer for the Asian Journal.

“Filipino media are one of the almost singular forces that are most loyal, most dedicated [NAM members] that have really pushed the New America Media to challenge itself, to keep on growing, and to really heighten the issues that we all share,” Keeley noted.