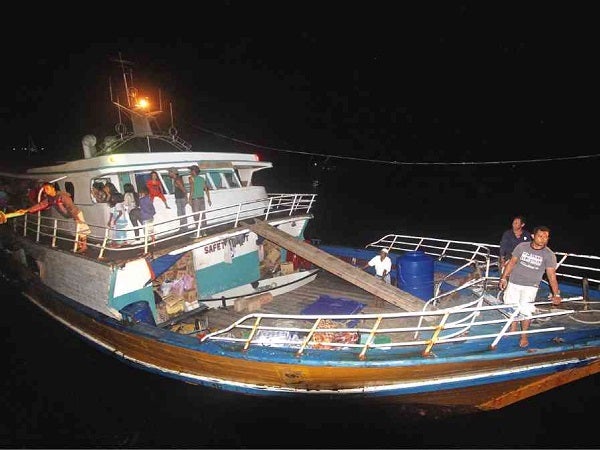 SLOW BOAT TO FREEDOM AND SAFETY A police sweep of the Filipino community in Sandakan drove its residents into “extreme fear” forcing them to escape into the night boarding whatever available boat that would take them. An initial wave of 400 evacuees from Sabah arrived in Sulu on Friday. A thousand more are expected in the next few days. KARLOS MANLUPIG/INQUIRER MINDANAO

ZAMBOANGA CITY—“They dragged all the men outside the houses, kicked and hit them,” 32-year-old Amira Taradji said on Friday as she recounted her family’s ordeal in Sandakan, which started when Malaysian security forces launched a crackdown on suspected supporters of Sulu Sultan Jamalul Kiram III in Sabah.

Taradji said Malaysian policemen ordered Filipino men to run as fast as they could and shot them.

Among those killed on Monday night during the police sweep of a Filipino community in Sandakan was her brother, Jumadil, she said.

Taradji, who was originally from Calinan in Davao City, was among some 400 Filipinos who fled Lahad Datu, Semporna, Tawau and Kunak in Sabah for Sulu as the violence sparked by the intrusion of the followers of Jamalul into the eastern Malaysian state spread at the start of the week.

In other Philippine areas near Sabah, hundreds more have arrived since the police crackdown started and many more Filipinos are expected to return home anytime soon, according to government officials.

Speaking to the INQUIRER by phone through the help of a Sulu local official shortly after arriving in Patikul town by a commercial vessel from Sabah late Friday, Taradji said the police sweeps had become dreadful for both Filipinos and Sabahans known as Orang Suluk (people who originated from Sulu).

Taradji reported the arrest of Filipino men in Tawau and Kunak.

Some of the arrested men, who showed immigration papers, were shot dead, she said, recounting reports by other Filipinos who fled Sabah with her.

“Some of those arrested did not see jail because they were shot and killed,” Taradji said.

She said those who had been locked up were also unlucky, as the Malaysian authorities were not feeding them.

Taradji had lived in Sandakan since she was 6 years old and she was a holder of MyKad, the identification card issued to Malaysian citizens and permanent residents.

She said that despite her and her family’s being holders of MyKad, they hastily abandoned their home when the police sweeps started Monday night.

She said that from a distance, she saw how those caught during the raid suffered in the hands of Malaysian policemen.

“We sailed from Sandakan to nearby islands. From one island to another, until we reached a small island where we took [an outrigger] for the Philippines. We begged hard so they would allow us into one of the [their boats],” she said.

Carla Manlaw, 47, said the extreme fear of Malaysian policemen, with stories of abuses and killings, prompted her and other Filipinos to leave for Bongao in Tawi-Tawi.

Manlaw and 99 others, including children and elderly people, reached Philippine waters in two motorboats after sailing for about two hours from Sandakan. They were intercepted and escorted by a Philippine Navy ship to Bongao late Friday.

“My employer had no problem with having a Filipino worker. But what bothered me was the police,” she said.

Manlaw said the other Filipinos in her boat fled because of fear. “What will they do to us?” she said, quoting her fellow refugees.

She said that when she heard that a vessel was leaving for Bongao from Sandakan, she immediately grabbed her things and went for it.

Mayor Hussin Amin of Jolo, Sulu, said the accounts of Filipinos fleeing police abuse in Sabah were “alarming and disturbing” and the Philippine government should look into it.

He said he had spoken with many refugees and their stories were the same:  Malaysian soldiers and policemen do not distinguish between illegal immigrants and MyKad holders.

“Soldiers and policemen stormed their houses and even those with legitimate working papers like passports and IC papers were not spared. These documents were allegedly torn before their eyes. Men were told to run and were shot if they did. Those who refused were beaten black and blue. Filipinos in jail were executed,” Amin said by phone late Friday.

“We are asking our government to investigate now. Refugees from Sandakan and Sabah had spoken to us about their ordeals. If indeed what they have been telling us is true, then Malaysian authorities are not just targeting the Kirams in Lahad Datu,” Amin said.

The New York-based Human Rights Watch also wants to know what is really happening in Sabah.

Phil Robertson, deputy Asia director of  Human Rights Watch, issued a statement on Friday saying that while the “situation on the ground in the conflict zone in Sabah is still quite murky,” Malaysia  “should provide clear and accurate information on what had occurred.”

Robertson said the Malaysian authorities should “ensure the protection of all civilians in the area, and allow humanitarian access for the provision of emergency assistance to those affected by the violence.”

“We’re concerned about the Malaysian government’s use of the Security Offenses Special Measures Act to detain reportedly more than 50 individuals, and call on the government to either charge them with a recognizable criminal offense or release them.  All parties to the conflict should heed the call of UN Secretary General Ban Ki-Moon to ‘act in full respect of international human rights norms and standards,” Robertson said.

Amin said that for now, he tended to believe the stories told by the refugees that Filipino men, especially Tausug, were being killed in the streets and in detention centers in Malaysia.

“Our people are treated like animals there and this has to stop because they are no longer hitting the Kirams,” Amin said.

He said one reason why he believed the stories was his observation that children and women were so “deeply traumatized” that they tried to flee when they saw Filipino policemen as they arrived in Jolo.

“Some (of them) even attempted to jump to the sea, thinking they were still in Malaysia,” he said, referring to scenes at the Jolo port this week.

“I spoke to them and gave them assurance that they were all home and no one would harm them now and the policemen securing the port were not Malaysians but Filipinos protecting them,” Amin said.

Social welfare officials, who spoke to the Inquirer on condition of anonymity, said they anticipated that more than a thousand Filipinos from Sabah would arrive in the next few days.

One official said the crush of evacuees would “pose a problem” greater than the difficulties caused by the massive deportation of Filipinos from Malaysia in 2002.

Some 64,000 undocumented Filipinos were forced out of Sabah in that year and feeding or relocating them became a nightmare for officials.

Amirah Lidasan of the militant group Suara Bangsamoro said she pitied women and children who braved danger at sea to escape the Sabah violence.

The waters between Sabah and the Philippine areas of Tawi-Tawi and Sulu are known for huge waves that could swamp and capsize small vessels.

Taradji said another problem facing many Filipinos fleeing Sabah was how to live in the Philippines after living for decades in Malaysia.

She said she managed to bring some money to sustain her family for a few days.

But after that, she and her husband do not know how to feed the family, she said.

“We do not even know which way is Calinan now,” Taradji said, adding that the Philippines is now a foreign land to her and her family after living for the past 26 years in Sabah.

Manlaw had the same thing to say.

“We have no future here, unlike in Sabah where we had jobs,” she said.

Like Taradji, Manlaw and the other refugees who arrived in Bongao were being assisted by government agencies. With reports from Cynthia D. Balana in Manila; and Allan Nawal, Inquirer Mindanao