3 NBI agents pose as TV crewmen to spy on Kirams 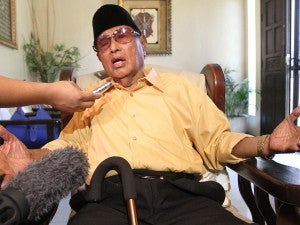 MANILA, Philippines – Three undercover agents of the National Bureau of Investigation posed as crew members of a TV network to get inside the residence of Sulu Sultan Jamalul Kiram III Wednesday afternoon.

The three male agents stayed inside the house for about 10 minutes and were seen surveying the house.

Only after agents left did the media men who have been covering the Kiram learned that the trio were from the NBI.

TV5 reporter Carla Lim, who is assigned to cover the Kirams, said she got a call in her cellphone from someone who claimed to be from the NBI asking whether they could go inside the Kiram residence.

Lim said she was told by the NBI that they wanted to “observe” because they were getting “information” that they declined to elaborate.

Lim said the NBI told her they want to pose as TV5 crew but Lim flatly told them no.

When the three agents arrived, Lim accompanied them to living room of Pangyan Fatima Kiram, the Sultan’s wife.

Lim said before the agents arrived that she had told Pangyan Kiram that NBI agents were on their way.

Kiram entertained them and had juice and coffee served, but Lim was distraught when the agents told Kiram they were with the TV5 reporter.

On the way out one of the agents told Lim,  “Kailangan mo kami ihatid para hindi halata (You must bring us out so they won’t suspect a thing).”