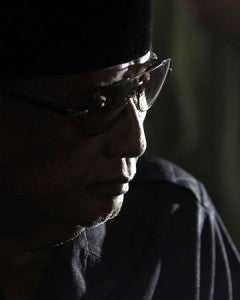 Filipino Sultan Jamalul Kiram III listens to questions from reporters at his residence in suburban Taguig, south of Manila, Philippines on Sunday March 3, 2013. Malaysia’s police chief said at least seven people have been killed in a shootout between police and suspected Filipino members of the Muslim royal clan on Borneo island. (AP Photo/Aaron Favila)

MANILA, Philippines— Unlike many other Muslim royalties basking in grand palaces and opulent lifestyles, Sultan Jamalul Kiram III’s kingdom sits in a rundown two-story house in a poor Islamic community in Manila, the only hint of power and glory the title attached to his name.

“I’m the poorest sultan in the world,” the ailing Kiram, 74, told The Associated Press in an interview in his residence in Maharlika village in the Philippine capital.

Although largely forgotten and dismissed as a vestige from a bygone era, Kiram’s sultanate sparked the biggest security crisis in Malaysia and the Philippines in decades when his younger brother early last month led about 200 followers, dozens of them armed, by boat from the southern Philippines a short distance away to a village in Sabah in the vast, oil-rich Borneo region to claim the land the sultanate insists belongs to them.

A stunned Malaysia, which runs the frontier region of timberlands and palm oil plantations as its second-largest federal state, poured in elite police and army troops and called in airstrikes to quell what it called an armed intrusion. Sporadic clashes have so far killed 19 intruders and eight policemen. Troops launched a full-scale assault Tuesday, codenamed “Operation Sovereign,” but failed to account for most of the Filipinos, who according to the Kiram family were unhurt.

Malaysian forces shot and possibly killed one of the men, who appear to be trying to escape the area, police said. Home Minister Hishammuddin Hussein said later Wednesday that security forces combing the area found 12 bodies. However, it was not clear if they died in Tuesday’s strike or in another clash last week that left a dozen of the Filipinos dead.

The crisis has tested the neighbors’ friendly ties and hit the leaders of both nations at a delicate time politically.

The Kirams claim Sabah has belonged to their sultanate for centuries and was only leased to Malaysia, which they say pays them a paltry annual rent of 5,300 Malaysian ringgit ($1,708). Malaysian officials contend the payments are part of an arrangement under which the sultanate has ceded the 74,000 square kilometers (28,000 square miles) of Sabah territory to their country.

Philippine presidents have relegated the volatile feud to the backburner despite efforts by the Kirams to put it back to the national agenda. The Feb. 9 Sabah expedition by the sultan’s younger brother, Agbimuddin Kiram, and the ensuing violence have resurrected the long-dormant issue with the murky history beyond anybody’s expectations.

Overran by history, the Kirams carry royal titles and nothing much else.

“When I was a child, I thought ‘princess’ was just my name because when you’re a child, your idea of being a princess is one with a crown, a palace, a carriage. But not me,” said Jacel Kiram, a 35-year-old daughter of the sultan, who is regarded a princess.

At his Maharlika village home, the sultan, who has failed kidneys and a heart ailment, struggled with slurred speech to proudly recount the saga of his clan’s empire based in the Sulu archipelago in the southern Philippines. Chinese and European leaders, he said, once sent vassals to pay homage to his powerful forebears. The Sulu sultanate, which emerged in the 1400s, preceded both the Philippine republic and Malaysia by centuries.

The exploits of the sultanate’s native Tausug warriors were so legendary, the Brunei sultan at the time sought their help in putting down a rebellion in the 1600-1700s. When the uprising was crushed, the Brunei sultan handed over Sabah to his Sulu counterpart as a gift of gratitude.

A Filipino sultan later leased Sabah to a British colonial-era company. The territory was later annexed by Britain. In 1963, six years after colonial Malaya gained independence, Sabah voted to join the new Malaysia.

The Sulu sultanate had steadily declined through the centuries, its power passed on to a succession of leaders and heirs. Jamalul Kiram III is the 33rd sultan and a symbolic leader with followers in Sulu and nearby southern provinces, which are among the country’s poorest and are troubled by Muslim rebels, al-Qaida-linked extremists and outlaws.

Born in Sulu’s far-flung Maimbung town in 1938, Kiram is a beloved leader who in his youth turned to dance and singing and played sports, including his favorite, tennis. He once worked as a disk jockey in a Jolo radio station. He took up law but failed to take the bar exams when he joined a prominent cultural dance group in the 1960s, according to his wife, Fatima Celia.

He also ran for senator in 2007, backed by former President Gloria Macapagal Arroyo — a tacit recognition of his sultanate leadership — but lost, leaving his family in debt due to the high campaign expenses, she said.

Last year, the sultan was diagnosed with failed kidneys and began to receive dialysis treatment, causing family members to miss out on monthly payments for their house, which they nearly lost had friends not helped out, Celia said.

Since then, Kiram has mostly been sidelined to his bedroom, which resembles a hospital unit with two oxygen tanks and serves as an office where he met visitors and followers seeking all sorts of help.

In his younger years, Kiram said he traveled often to Sabah, a short ride by boat from Sulu and nearby Tawi Tawi provinces. Large numbers of hardup Filipinos have relocated there in search of jobs and opportunities. “It’s really very rich,” he said of Sabah. “When I’m in Sabah, I feel at home.”

It was his decrepit sultanate’s inability to help out Filipino followers, who are seeking work and greener pastures, that he said prompted him to allow his brother to lead a first batch of settlers to relocate in a village in Sabah’s coastal district of Lahad Datu, the event that triggered the three-week deadly standoff.

Worried about straining relations with affluent Malaysia, Philippine President Benigno Aquino III has walked a delicate tightrope, careful to avoid a collision course with Malaysia and at the same time reach out to the Kirams, who accused him of mishandling the crisis and siding with Malaysia. The Sabah standoff erupted as Aquino was grappling with a separate rift with China over contested South China Sea territories.

Malaysia has also brokered peace talks between Manila and the largest Muslim rebel group in the southern Philippines. Both countries are founding members of an influential regional bloc, the Association of Southeast Asian Nations.

In Malaysia, activists have called for tougher border security and immigration policies in Sabah, presenting a major political challenge to Prime Minister Najib Razak’s ruling coalition, which faces general elections that must be held by the end of June.

James Chin, political science lecturer with Monash University in Malaysia, said that the crisis could spell trouble for Najib if the Filipino community in Sabah and Sarawak states, many who have assimilated into Malaysian society and hold identity cards, vote against his ruling coalition.

Sabah and Sarawak on Borneo jointly account for a quarter of parliamentary seats and are key to a victory for Najib’s coalition.

The Kirams said the sultanate wanted the Philippine government to pursue their claim to Sabah, but successive presidents have ignored their plea.

“It’s good if they were placed in jail,” she said. “The problem is they are caned, they are punished and then deported … we couldn’t do anything.”

The sultan said his followers being hunted in Sabah were fighting for their rights and honor, something profoundly important among his followers. The Malaysians could wipe them out but the problem won’t go away, his wife said.

“They would be replaced by others and generations more to come,” she said.