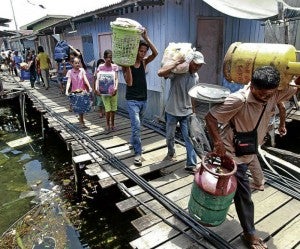 MOVING OUT Residents of Simunul village in Semporna town, where six Filipinos and five Malaysian policemen died in clashes on Saturday, lug their belongings as they leave their homes on stilts to be out of harm’s way. MALAYSIA’S THE STAR/ASIA NEWS NETWORK

KUALA LUMPUR—Malaysia on Monday sent hundreds of military troops to Sabah to help police neutralize armed followers of the sultan of Sulu who have killed eight police officers in the country’s bloodiest security crisis.

Twenty-seven people have reportedly been killed since fighting between the followers of Sultan Jamalul Kiram III began in Tanduao village in Lahad Datu town on March 1.

Of the dead, 19 were followers of the sultan who were killed in skirmishes with police that shocked Malaysians unaccustomed to such violence in their country.

The main group of the sultan’s followers comprising 200-odd men and women, including about 30 who are armed, is cornered by Malaysian security forces in a small area in Tanduao, where they landed on

Feb. 9 after crossing by sea from Tawi-Tawi in southern Philippines to stake the sultanate’s claim to Sabah.

It is Malaysia’s worst security breach in years and Prime Minister Najib Razak has authorized an investigation into reports that the political opposition is involved.

Najib, who has vowed to root out the intruders, authorized a “doubling” of police and armed forces deployed in Sabah.

“An additional two Army battalions have been dispatched to Sabah,” Najib was quoted as saying by state news agency Bernama.

Public attention focused on Monday on how to minimize casualties while apprehending the Sulu sultan’s followers surrounded by Malaysian security forces as well as an undetermined number of other armed Filipinos suspected to be in two other districts of Sabah within 300 kilometers of Lahad Datu.

“The situation is under control now,” Hamza said. “There will be cooperation” between the military and the police, he said.

Hamza declined to elaborate on specific strategies or on a call by former Prime Minister Mahathir Mohamad for lethal action.

FILIPINO FATALITY Villagers in Kampung Simunul in Semporna look at the body of a man believed to be from Sulu who was killed during a shootout with Malaysian forces. MALAYSIA’S THE STAR/ASIA NEWS NETWORK

“There is no way out other than launching a counterattack to eliminate” the intruders, Bernama quoted Mahathir as saying on Sunday. “Although many of them will be killed, this cannot be avoided because they had attacked Sabah, and not the other way around.”

Najib declared over the weekend that security forces were authorized to “take any action deemed necessary.”

The intruders, led by the Sulu sultan’s brother Agbimuddin, have rebuffed calls for them to leave, saying ownership documents from the late 1800s prove the territory is theirs.

It remains unclear whether the armed Filipinos who ambushed a police team in Semporna town on Saturday night are part of the Lahad Datu group.

The clash in Semporna, where five Malaysian policemen and two intruders were killed, and a police claim that they were pursuing yet another group of armed men in a nearby town has sparked fears of further infiltration by Filipinos from Sulu.

The exact identities of the armed men remains a mystery, but Malaysia’s military chief, Zulkifeli Zin, told a press conference in Sabah on Sunday that the intruders appeared to have combat experience.

Their “insurgency guerrilla technique is quite good,” he was quoted as saying.

Zulkifeli said Malaysia’s military and the police were adopting a cautious approach in their plan to resolve the standoff with Agbimuddin’s group in Tanduao.

He noted that Agbimuddin’s group had planned their location around the village in such a way that they would inflict casualties if Malaysian security forces enter the area.

“They are at the center and have people spread out, including snipers,” Zulkifeli said.

“They know we will suffer casualties if we go in as the area is open,” he said.

“They are under close surveillance by our special forces,” Zulkifeli said.

But he added that while Malaysia was determined to “bring this episode to a close” as soon as possible, any action would take a little more time.

Read Next
Aquino tells plotters: You will not succeed
EDITORS' PICK
Delivering delight against all odds
153 protests filed vs China actions in PH waters in 2021 — DFA
Next level mobile photography within reach with vivo X70 co-engineered with ZEISS
Malls, parks in NCR still off limits to minors even with eased restrictions
Lacson wants DOF to suspend TRAIN law as oil prices rise
Leaked: A 60x Zoom and all-new Helio G96 mean a complete overhaul for TECNO Mobile’s new CAMON 18 series
MOST READ
Matibag calls Senate budget hearing ‘political,’ gets kicked out
Duterte inaugurates P684-M bypass road project in Quezon
Robredo to supporters: Be calm, gentle and do good deeds
Cristine Reyes opens up on her trauma from abuse, painful childhood
Don't miss out on the latest news and information.