(Editor’s Note: Following are excerpts from a speech that Sen. Jovito R. Salonga delivered on March 30, 1963, by way of rebuttal to the speech of Sen. Lorenzo Sumulong berating the Philippine claim to North Borneo (Sabah), which was filed by President Diosdado Macapagal on June 22, 1962, followed by the London negotiations of January 1963. Salonga was with the team of Vice President Emmanuel Pelaez who headed the London negotiations on behalf of our government. The Inquirer is reprinting excerpts from Salonga’s speech to shed light on the Sabah issue.) 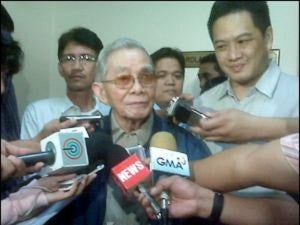 A few days ago, Sen. Lorenzo Sumulong spoke on the floor of the Senate to air his views on the Philippine claim to North Borneo. My first reaction was to keep my peace and observe this shocking spectacle in silence, particularly in the light of the request of the British panel during the London Conference that the documents and the records of the proceedings be considered confidential, until they could be declassified in the normal course of diplomatic procedure. In part, my reaction was dictated by the belief, so aptly expressed elsewhere, that the best way to answer a bad argument is to let it go on and that silence is the “unbearable repartee.”

But silence could be tortured out of context and construed by others, not familiar with the facts, as an implied admission of the weakness of the Philippine stand. And so, I decided to make this reply, fully aware that in an exchange such as this, considering that our claim is still pending and each side is feeling out the other’s legal position, none but our British friends and their successors may well profit.

The good senator, whose patriotism I do not propose to impugn, has had access to the confidential records and documents of the Department of Foreign Affairs. By his own admission, he attended closed-door hearings of the Senate committees on foreign relations and national defense, where crucial matters of national survival and security were taken up. He knows the classified, confidential nature of the records and documents bearing on the Philippine claim.

Senator Sumulong has now found it proper and imperative, if we take him literally, to ventilate his views berating the merit and validity of the Republic’s claim, accusing his own government of gross ignorance and holding in unbelievable disdain the Philippine position on the British-sponsored Malaysia plan. He has chosen to assault the Philippine position at a time when his own government, by virtue of the British request, may be said to be somewhat helpless in making, right in our own country, an adequate, fully documented defense of the Philippine stand. I trust our British friends, here and across the seas, will understand if, in defense of our position, we come pretty close to the area of danger.

The good senator tells us that in view of the “importance and magnitude” of the subject, he decided to wait “until all the relevant facts and information” were in, that he had made his own “studies and researches,” which on the basis of the press releases issued by his office, must have been quite massive. The morning papers last Monday (March 25) quoted the senator as having bewailed, in advance of his privilege speech, that “only one side of the problem has been presented so far,” (meaning the Philippine side) seemingly unaware, despite the depth and range of his studies, that in the world press, only the British side has been given the benefit of full and favorable publicity and that the Philippine side has been summarily dismissed, just as the senator dismisses it now with apparent contempt, as “shadowy,” “dubious” and “flimsy.” It may interest the good senator to know that his statements, particularly on the eve of the talks in London, consistently derogatory of the Philippine claim, were seized upon by the English press with great delight, as if to show to the Philippine panel how well informed the senator was. It is, of course, not the fault of the senator that the British, in an admirable show of unity, enjoyed and were immensely fascinated by his press releases and statements.

But before I take up the senator’s arguments in detail, it may be well to set our frame of reference by restating the position of the Philippine government on the North Borneo claim.

Thousands of years ago, what is now known as the Philippines and what is known today as Borneo used to constitute a single historical, cultural, economic unit. Authoritative Western scientists have traced the land bridges that connected these two places. The inhabitants of the Philippines and Borneo come from the same racial stock, they have the same color, they have or used to have similar customs and traditions. Borneo is only 18 miles away from us today.

Here, our claim really begins. Over the years, the various European countries, including Britain, Spain and the Netherlands, acknowledged the sultan of Sulu as the sovereign ruler of North Borneo. They entered into various treaty arrangements with him.

In 1878, a keen Austrian adventurer, by the name of Baron de Overbeck, having known that the sultan of Sulu was facing a life-and-death struggle with the Spanish forces in the Sulu Archipelago, went to Sulu, took advantage of the situation and persuaded the sultan of Sulu to lease to him, in consideration of a yearly rental of Malayan $5,000 (roughly equivalent to a meager US$1,600), the territory now in question. The contract of lease—and I call it so on the basis of British documents and records that cannot be disputed here or abroad—contains a technical description of the territory in terms of natural boundaries, thus:

“… all the territories and lands being tributary to us on the mainland of the island of Borneo commencing from the Pandassan River on the NW coast and extending along the whole east coast as far as the Sibuco River in the south and comprising, among others, the states of Peitan, Sugut, Bangaya, Labuk, Sandakan, Kinabatangan, Muniang and all the other territories and states to the southward thereof bordering on Darvel Bay and as far as the Sibuco River with all the islands within three marine leagues of the coast.”

Overbeck later sold out all his rights under the contract to Alfred Dent, an English merchant, who established a provisional association and later a company, known as the British North Borneo Company, which assumed all the rights and obligations under the 1878 contract. This company was awarded a Royal Charter in 1881. A protest against the grant of the charter was lodged by the Spanish and the Dutch governments and in reply, the British government clarified its position and stated in unmistakable language that “sovereignty remains with the sultan of Sulu” and that the company was merely an administering authority.

In 1946, the British North Borneo Company transferred all its rights and obligations to the British Crown. The Crown, on July 10, 1946—just six days after Philippine independence—asserted full sovereign rights over North Borneo, as of that date. Shortly thereafter former American Governor General Francis Burton Harrison, then special adviser to the Philippine government on foreign affairs, denounced the cession order as a unilateral act in violation of legal rights. In 1950, Congressman Macapagal—along with Congressmen Arsenio Lacson and Arturo Tolentino—sponsored a resolution urging the formal institution of the claim to North Borneo. Prolonged studies were in the meanwhile undertaken and in 1962 the House of Representatives, in rare unanimity, passed a resolution urging the President of the Philippines to recover North Borneo consistent with international law and procedure. Acting on this unanimous resolution and having acquired all the rights and interests of the sultanate of Sulu, the Republic of the Philippines, through the President, filed the claim to North Borneo.

Our claim is mainly based on the following propositions: that Overbeck and Dent, not being sovereign entities nor representing sovereign entities, could not and did not acquire dominion and sovereignty over North Borneo; that on the basis of authoritative British and Spanish documents, the British North Borneo Company, a private trading concern to whom Dent transferred his rights, did not and could not acquire dominion and sovereignty over North Borneo; that their rights were as those indicated in the basic contract, namely, that of a lessee and a mere delegate; that in accordance with established precedents in international law, the assertion of sovereign rights by the British Crown in 1946, in complete disregard of the contract of 1878 and their solemn commitments, did not and cannot produce legal results in the form of a new tide. (Full text of Salonga’s and Sumulong’s speeches are available at Inquirer.net.)