Aquino tells plotters: You will not succeed 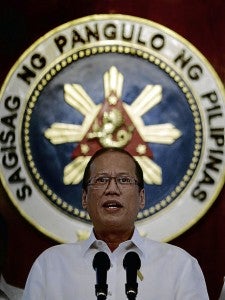 As violence spread in Sabah, President Aquino on Monday warned the conspirators in the intrusion of the followers of the sultan of Sulu into the eastern Malaysian state: “You will not succeed.”

In a televised address with officials of the Autonomous Region in Muslim Mindanao (ARMM), the President spoke of the alleged involvement of officials of the Arroyo administration in the conspiracy, but he indicated that evidence was still being gathered on the role of former President and now Pampanga Rep. Gloria Macapagal-Arroyo.

Aquino said cases were “being built up” against the players.

But the family of Sultan of Sulu Jamalul Kiram III said the government should show proof that there was a sinister intent behind their followers’ crossing into Sabah to stake their claim to the territory.

“All these are just allegations. Prove it. We challenge them to prove it,” Princess Jacel Kiram, daughter of the sultan, said at a news conference.

She reported fresh fighting in Tanduao village in Lahad Datu town in Sabah where a group of sultanate followers led by her uncle Agbimuddin Kiram is cornered by Malaysian security forces.

Agbimuddin texted the sultan at about 4:20 p.m. Monday, reporting fighting between his group and Malaysian police, she said.

While warning the conspirators, President Aquino expressed concern about the safety of Agbimuddin and his armed followers, as well as the 800,000 Filipinos living and working in Sabah.

“We’re aware of the conspiracy that has led to this situation, a situation that has no immediate solution. We see some of them, while the others are lurking in the dark. The clan of Sultan Jamalul Kiram III can’t do this kind of move by themselves. It’s very noticeable that that there’s only one line coming from the critics, adding fire to a serious situation. They’ve worsened this issue, and they’re at it while hundreds of thousands of Filipinos face danger,” Aquino said.

“To those people behind this, I’m telling you now: You will not succeed. Those who have committed a crime against the country will be called to account,” he said.

Former National Security Adviser Norberto Gonzales, former Tarlac Rep. Jose Cojuangco and his wife, Margarita, and Moro National Liberation Front (MNLF) chairman Nur Misuari had been implicated as financiers of the Kirams’ “excursion” to Sabah, but they have strongly denied the allegations.

Responding to reporters’ questions later, the President indicated that the Kirams and the conspirators would face charges.

“Let’s start with this: Does the Constitution sanction any armed force beside the Armed Forces of the Philippines? Is there not a provision against armed groups? They are obviously by definition an armed group. They call themselves a particular name, and there is allegedly some connivance by certain members of the previous administration in the formation of this, which is in violation of the Constitution and various other laws of the land,” he said, spelling out the possible charges against the Kirams and the conspirators.

He said the Revised Penal Code also penalizes inciting to war. “When an armed group goes into an area administered by a different nation, can that not be considered an act of war by some of our citizens?” he said.

He added that the penal code also prescribes penalty for people who “incite others to war.”

“The (Department of Justice) is preparing the charges,” he said.

Asked if the conspiracy led up to Arroyo, the President replied: “You’re asking for a conclusion that I wish I had right now. But again unless we have the evidence that can be brought before a court that will prove the case, I will not make an accusation.”

“Cases are being built up. Let’s emphasize this: Jamalul Kiram is sick, he needs dialysis and he is being assisted by the (Philippine Charity Sweepstakes Office). So even in terms of attending to his own health, he needs assistance. I’m told that renting a boat, a sufficiently large boat, to go to Sabah, costs about P100,000. There were two boats and one speedboat used by this group—so funds and food [were given to them],” he said.

When asked about Gonzales’ denial of reports naming him as instigator, Aquino said: “You know I won’t accuse anyone without any piece of evidence.”

As public concern grew over the fate of the armed Filipinos and their countrymen in Sabah following the spread of violence to other parts of the state over the weekend, Aquino said he was concerned about the safety of all Filipinos in Sabah.

“As President, the life not only of the group of Rajah Mudah Agbimuddin Kiram but also the welfare and safety of the estimated 800,000 Filipinos in Sabah rest on my shoulders. Every life is important, and we have no other objective but to ensure the safety of our countrymen, whichever part of the world they are,” he said.

“Let’s be frank with one another: If the situation is reversed, and our own community is raided by any armed group, can we just sit still and keep quiet? Aren’t we going to ask help from the government, too?” he added.

“What’s sad is that a few people chose to make this happen, and put many Filipinos in danger. Nonetheless, we won’t lose strength to end this conflict at the soonest possible time,” the President said.

“It’s simple: This would end if the personalities involved become reasonable, especially those who think of themselves as true leaders,” he said.

Aquino reiterated his call to the Kirams: “It’s not reasonable to ask for understanding if your gun is pointed to the head of the other party. We can only start reasonable talk once you’re ready to become sober and sit down at the table with an open mind.”

Aquino confirmed that he had a phone conversation with Malaysian Prime Minister Najib Razak at around 1 a.m. on Saturday.

“He told us that the situation has crossed the line. As to what happened [last Friday], negotiations were no longer possible because of the loss of life, especially on the part of the Malaysians. He said his countrymen were very angry,” he said.

Since the line had been crossed after weeks of appeal for the Kirams to stand down became futile, Najib authorized the security forces to end the standoff, Aquino said.

“On my part, I requested that our countrymen who are estimated to be 800,000 should not be affected, and we were given assurance that they will try to ensure this,” he said.

Aquino, however, said he did not give clearance to the Malaysians to go after Agbimuddin and his followers.

The Department of Foreign Affairs said Del Rosario would meet with Malaysian Foreign Minister Anifah Aman and “continue discussions on how to prevent further loss of lives and to appeal to the Malaysian authorities to exercise maximum tolerance in dealing with the remaining members of Agbimuddin’s group.

Aquino said that the trip of Foreign Secretary Del Rosario to Kuala Lumpur was aimed at “exploring possible other avenues.”

But the wife of the sultan, Princess Fatima Kiram, said only the intervention of the United Nations or another country could end the conflict in Sabah.

“This is honor above life. (Malacañang officials) are saying life is more important. But for us Tausug, honor is more important than life,” Fatima said.—With reports from Nikko Dizon and Tarra Quismundo