In California, a push to highlight the Filipino story 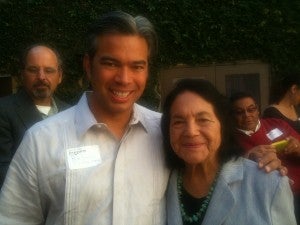 SAN FRANCISCO – It didn’t take long for it to become evident that finally having a Filipino in the California State Assembly would be a big deal for Filipinos in California and beyond.

Just five weeks after being sworn in, Rob Bonta, California’s first Filipino-American assembly member, began working on a bill that would finally honor Filipino immigrants who, nearly a century ago, moved to the US to work as field hands in California, but went on to make history.

“As the first Filipino-American state legislator in the history of California, I have the opportunity to provide a voice for the Filipino-American community — a community whose contributions have been historically underemphasized in the story of our state,” he said.

Now to be sure, the idea of highlighting the Filipinos’ incredible journey in California didn’t have to come from the state’s first Filipino-American legislator. In fact, Bonta had the work of other legislators, who were not Filipinos, to build on.

What makes the Bonta Bill significant is partly because of who he is and how he fits into these stories. That’s because his parents were activists of the historic United Farm Workers, the historic union that made the plight of US agricultural workers more widely-known, and the broader Civil Rights struggles of the 1960s.

“I grew up at the United Farm Workers headquarters in La Paz, California,” Bonta said. “My parents organized farm workers alongside strong leaders such as Dolores Huerta and César Chávez.”

His parents also worked with the legends of the Filipino legends of that movement. In fact, Bonta argues that, “The stories of great Filipino-Americans such as Larry Itliong, Pete Velasco and Philip Vera Cruz, and their leadership roles in the Delano Grape Strike and other critical turning points in the farm labor movement, should be learned by every child in our state.”

These were stories of remarkable courage and dedication that, unfortunately, have been largely downplayed in the teaching of California history.

When people hear of the UFW, or the great farm worker strikes of the 1960s, they typically remember people like Chavez and Huerta and the Mexican members of the movement.

The roles of the Filipino farm workers have been ignored. Which means an important component of the story is usually missing in the retelling of that chapter in California history.

After all, it was the courageous decision of the Filipinos to wage a strike in Delano in September 1965 that started it all.

That’s one point that’s usually forgotten or ignored.  The Filipinos began that fight, and the Mexicans, led by Chavez followed, and the two groups eventually formed a powerful alliance that shook California and the rest of the US.

The rest was history.

Suddenly California farm workers were at the forefront of another major battlefield in the Civil Rights struggles of the 1960s.  And Filipinos played a critical role, although that is barely given any attention in the public discussions of that history.

This personally became evident to me when I began my career as a reporter for the San Francisco Chronicle. I had just started when Chavez died in 1993.

He was honored as a hero of the farm workers and civil rights movement. To be sure, he deserved the honor, and his story surely should be known by all Americans.

But when Vera Cruz died the following year, there was little public recognition of his role in the movement. He was essentially ignored. I wrote a story about his death – but it got cut and published as a short obituary.

A lot has changed in the last two decades. Plays and documentaries have explored the lives of the manongs, as the Filipino farm workers of Vera Cruz and Itliong’s generation are known.  In Stockton, California, once a center of the Filipino American community in the 1930s and 1940s, young Filipino Americans have successfully pushed to reclaim the historic site known as Little Manila.

But more needs to be done, as Bonta appears to acknowledge in pushing his bill.

“Spreading awareness on this issue is a good start,” he said. “But adding the stories to our children’s curriculum makes it certain that these important stories are not forgotten.”

“These important leaders deserve to have their stories shared to future generations,” he also said. “We cannot let them be lost.”

And they probably won’t be if the bill becomes law.

By next year, the struggles of Phillip Vera Cruz, Pete Velasco and Larry Itliong could finally become more deeply embedded in the telling of the California story.