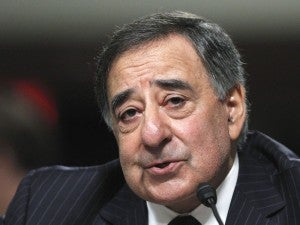 WASHINGTON—US Defense Secretary Leon Panetta on Wednesday urged China to avoid confrontation and seek out a peaceful dialogue with Japan and other countries over territorial disputes.

The Pentagon chief said he has appealed to his counterparts in Beijing to negotiate regional agreements to defuse an array of disagreements over maritime territory.

Asked about tensions between China and Japan over the Senkaku Islands after giving a speech at Georgetown University, Panetta voiced concern that “it’s the kind of situation where there are territorial claims that could ultimately get out of hand.”

He added: “One country or the other could react in a way that could create an even greater crisis.”

Tensions rose over the island dispute as Japan said a Chinese frigate had locked its weapon-targeting radar on a Japanese warship in the East China Sea last week. Japan’s Prime Minister Shinzo Abe called the move “dangerous” and “provocative.”

Panetta said China, the United States and other countries should work together to address “common challenges,” including piracy, natural disasters and territorial disputes.

Asia’s two largest economies are at odds over the sovereignty of an uninhabited island chain in the East China Sea, which Beijing claims as the Diaoyus.

At the same time, China, the Philippines, Brunei, Malaysia, Vietnam and Taiwan all have overlapping claims to the West Philippine Sea or South China Sea.

Read Next
DOTC gives nod to salvage work on USS Guardian
EDITORS' PICK
House energy committee chair Arroyo bats for cheap electricity
Honolulu Café is the cure for your Egg Tarts and Roastings cravings
Petition to reverse Comelec decision on Bongbong Marcos’ DQ case reaches SC
Luxe property: A way to build, preserve wealth
PH detects local transmission of Omicron subvariant BA.2.12.1
OVP: Pilot’s claim vs Robredo ‘never happened’, a ‘malicious fabrication’
MOST READ
Man posing as Marcos spox revealed to be an inmate in Bilibid — Guevarra
Heart Evangelista gets a ‘no’ from Chiz Escudero after asking, ‘Do I deserve a bag?’
Congress canvassing of votes for president, VP to begin May 24
3 Iloilo residents found with Omicron subvariant
Don't miss out on the latest news and information.