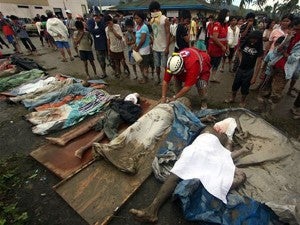 CATEEL, Davao Oriental—The provincial government of Davao Oriental and the World Food Program (WFP) have started briefing farmers on the cash-for-work program, in an effort to cover initially 800 hectares of rice farms in Cateel, Baganga and Boston municipalities.

Sharon Andrea Lumpias, cash and voucher officer of the WFP, said a farmer could work for 10 days, under the program, on a one-hectare rice farm and would get P226 per day or 75 percent of the authorized minimum daily wage set by the Regional Tripartite Wage Regulatory Board.

The government and WFP will hold a registration of the cash-for-work beneficiaries next week, according to Lumpias.

Under the program, WFP provides the funds to pay the farmers from the available funds of US$400,000 contributed by donor countries. Lumpias said USAID has also committed US$800,000 for the cash-for-work activities.

Farmer-beneficiaries have welcomed the program, but are having second thoughts about the process particularly on limiting the area for tilling to only one hectare. Each farmer is allowed only to register once for the program.

Resident Edwin Berha said he used to hire the services of farmers to plant rice for his entire 3.8 hectares farm at P5,000 under the “pakyaw” system. With that, they could only finish the work for 3 to 6 hours and serve another area the next day.

He proposed that farmers be allowed to work in the whole farm, regardless of size and the owner would pay for the work on the remaining areas.  “If the government would really like to help the farmers, why not spend for farm inputs such as fertilizers?” he said.

Before Typhoon Pablo, Juanito Patac used to work in the farm along with five to 10 other workers and each of them got paid P400. They worked up to six hours on three to five hectares and moved on to another farm the next day, he said.

Patac said the cash-for-work offer might be good, although financially not practicable compared to “pakyaw” system. He was also not keen on a one-time registration.

Elsa Basingan, who also attended the briefing, said she was fine with the program, but it would be useless if the government would not repair the steel gate of the dam providing irrigation to the farms.

Basingan, who owns 1.8 hectares of rice field, said “with or without the money we will really work hard, but government should repair the irrigation system because that is important.”

Municipal Rice Coordinator Francis Albarracin said the steel gate of the dam was damaged during the typhoon. This was de-silted and cleared of the debris days after Pablo, but the heavy rains the past weeks in Baganga aggravated the siltation at the dam’s steel gate blocking the flow of the water.

“This problem should be raised to the National Irrigation Authority,” he said.

In the situation report of the UN Office for Coordination of Humanitarian Affairs (UNOCHA) as of January 22, the Food, Shelter and Livelihood cluster has identified the cash-for-work activities particularly the restoration of agricultural-based livelihoods as one of the immediate-term strategies to ensure adequate food consumption and income support to allow people move on to the recovery phase.

Typhoon Pablo had caused widespread damage to agriculture with losses estimated at P10.65 million in Davao Oriental alone, as of January 3.