18 songs, only one Lea Salonga 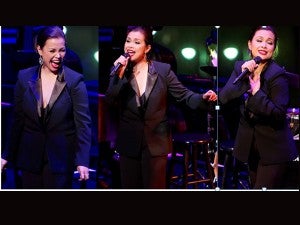 As always, Lea was perfect in every song. PHOTOS/ CARLO DAMOCLES

For the umpteenth time, I found myself craning my neck and applauding vigorously as I watched my all-time favorite Filipino singer, Lea Salonga.

I promised my editor this would be my fourth and last review, but I did not sign it in blood so there is no record of my pledge being official. Lea will always have a special place in my reporting life.

January 30th marked the launch of the Lincoln Center’s American Songbook Series. For the first time in its 15-season history, the series featured a Filipino musical artist.

“The American Songbook Series has been paying tribute to great American songwriting for 15 seasons,” said Lea, who kicked off the musical tradition.

“Normally it’s a great Broadway-centric canon dating between the 1920s and the 1960s,” she told an audience of about 600. “But we’re not doing that. We are paying tribute and celebrating about nine decades worth (of music), dating far back to people like the Gershwins, Irving Berlin, Lerner and Loewe, and moving forward to people like Stephen Schwartz, David Foster, Bruno Mars.”

As always, Lea was perfect in every song, her presence and quips onstage a total pleasure. Wearing a black tux with a plunging lapel, she belted her ballads and swayed to the more danceable numbers.

“We were up until 1:30 a.m. because we really wanted to tell an authentic story, not to just fictionalize things because quite honestly it’s very easy, ‘oh here’s a song and just say stuff very generally,’” said director Victor Lirio, one of Lea’s best friends.

The Tony winner and Disney star retold vignettes from her fascinating life. They included funny recollections about her mother, Ligaya, and daughter, Nicole.

She introduced her daughter Nicole through a text message: “Dear Mommy, I miss you,” Nicole wrote. “I hope you have a good show tonight. Please come home soon. I love you, Nic PS–Is it snowing there? Daddy says he misses you too.”

Dishing on her daughter’s “atrocious” spelling, she cracked, “C’mon she’s only 6, I need to manage my expectations.”

Most memorable was Lea’s interpretation of “Empty Chairs at Empty Tables” where she paid tribute to the victims of Sandy Hook Elementary School in Newtown, Connecticut.

“December 14, as I was heading to work, we heard the devastating news about the Sandy Hook Elem School. My husband and I, we held our daughter a little more tightly that day.”

Victor said the idea of singing “Empty Chairs” just felt right. “I told Lea, ‘Can you imagine every single mother of those kids could be singing this song.’ Instead of the barricade, it’s the classroom,” he shared. “We wanted to reinvent arrangements, we wanted to retell stories, we wanted to re-contextualize, we wanted to play on subtexts and not on its literal sense.”

Other crowd favorites were mash-up songs “I Enjoy Being A Girl” and “Femininity,” a number she dedicated to her mother.

“My mom is one of those strong independent-thinker type of women. She likes playing sports that men would normally play. She loves basketball, she loves softball, and she climbs coconut trees.”

Then there’s Bruno Mars’ “Grenade” that prompted dancing in the aisle. I saw an elderly woman managing a little headbanging.

The coquettish “There’s Nothing I Wouldn’t Do” and other Lea Salonga Staples, such as “Blackbird” and “The Journey,” were always pleasant to hear. But the one song that tugged the heart was “Wicked’s” ‘For Good’. It was hauntingly beautiful and kept playing in my head even as I headed back home.

Lea ended the 90-minute show with a new song from “Allegiance, a Broadway-bound musical that incubated and was first performed in California.