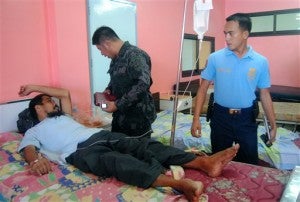 Ramel Vela, one of two Filipino members of a Jordanian TV journalist’s crew believed to have been kidnapped by al-Qaida-linked militants in June, is interviewed by a police officer in his hospital room Sunday, Feb. 3, 2013. “We never thought we’d make it out alive.” A teary-eyed Vela said. AP PHOTO/NICKEE BUTLANGAN

That was what cameraman Ramelito Vela said, teary-eyed in his hospital bed hours after he and his companion, audio technician Rolando Letrero, were freed by Abu Sayyaf bandits after nearly eight months of captivity in the jungles of nearby Jolo Island.

Vela and Letrero, both members of the TV crew of Jordanian journalist Baker Abdulla Atyani, were released in the village of Buhanginan in Patikul town on Saturday night.

Atyani is believed still held by the Abu Sayyaf bandits in the mountainous town, according to Senior Supt. Antonio Freyra, the Sulu police chief.

An unspecified amount was paid to secure the freedom of the two Filipinos, according to three security officials monitoring the kidnappings. The three spoke on condition of anonymity because they were not authorized to talk to reporters.

Military officials said the bandits had demanded P130 million for the release of Atyani and his two crew members.

“Strong pressure” from the Moro National Liberation Front (MNLF) prompted the release of the two Filipinos, said Octavio Dinampo, a professor of the Sulu-based Mindanao State University and provincial coordinator of Bantay Ceasefire.

The MNLF used to be biggest Moro rebel group in Mindanao until it signed an autonomy deal with the government in 1996.

On Sunday, hours after the two Filipinos were freed, a fierce clash erupted between the Abu Sayyaf and the MNLF, resulting in six dead among the combatants, officials said.

It was the first major bloody confrontation between the two insurgent groups, which have coexisted for years and at times were suspected of collaborating on kidnappings.

There was “no word” on the fate or whereabouts of Atyani, of the Dubai-based Al-Arabiya network, Chief Supt. Noel de los Reyes, the police chief for Northern Mindanao, told Agence France-Presse.

De los Reyes said that shortly after Vela and Letrero were freed, the two Filipinos called their families “from a hotel room in Jolo.” They were then taken by authorities to the provincial hospital for checkup.

As they lay in their beds, the two Filipinos tearfully recounted their ordeal in the hands of the Abu Sayyaf, according to the Jolo deputy provincial police chief, Chief Insp. Roy Gabor.

“We’re so happy…  We went through so much difficulty,” Gabor quoted Vela as saying.

Gabor described the pair as very emotional and said they emerged from the jungle looking thin and with unkempt hair and beards.

“They were a bit confused. They said they were just told to leave the hostage lair,” Gabor said.

Gabor said Vela and Letrero related that they were separated from Atyani on the fifth day of their captivity and they had not seen him since.

The gunmen gave them a horse because Vela could not walk due to a swollen leg and both left the jungle hideout unescorted until they reached a highway.

The pair then rode a tricycle to Jolo’s main port, where they went to a hotel and sought help, Gabor said, adding that the pair would soon fly back to Manila to be reunited with their families.

De los Reyes denied ransom was paid for the release of Vela and Letrero.

Col. Orlando de Leon, Joint Task Force Sulu commander, said Letrero and Vela would be moved to Zamboanga City “after they have been debriefed.”

Other officials said the gunmen were also still holding a Japanese treasure hunter, a Malaysian and an Australian.

“What I gathered from my contacts is that the [Abu Sayyaf] is still demanding P10 million from Atyani’s family,” Dinampo told the Inquirer.

Dinampo said the place where Vela and Letrero were held “is now surrounded by about 3,000 armed MNLF forces and they have encircled some 700 [Abu Sayyaf bandits] still holding other captives.”

Referring to the release of the two Filipinos, Dinampo quoted his sources as saying that armed men brought the pair down from the guerrillas’ hideout “and they were told to board a Tamaraw vehicle…  They were dropped off at the back of the capitol.”

“From there, they took a tricycle. Vela is reportedly seriously ill and he was assisted by his young companion (Letrero) and they went to Barangay Busbus and checked in at AVR Inn yesterday afternoon,” Dinampo said.

He said police brought the victims to the hospital “because Vela could hardly walk and is very sick.”

MNLF commander Khabir Malik said his group had taken the initiative to seek the freedom of the hostages to help the government clean up the image of Sulu, a predominantly Muslim province where the Abu Sayyaf has carried out deadly bombings, kidnappings for ransom and beheadings, primarily in the early 2000s.

US-backed military offensives have crippled the Abu Sayyaf in recent years but it remains a national security threat. Washington has listed the group as a terrorist organization.

Malik said last week that he met with Abu Sayyaf commander Jul-Asman Sawadjaan to seek the release of Atyani and his two crew members. But the bandits refused to release their captives to the MNLF, Malik said.

Malik had suggested that his armed group could consider other options, including a rescue, to secure the captives’ freedom.

Abu Sayyaf gunmen later handed the two Filipinos to still-unknown negotiators, but not to Malik’s group, angering the MNLF, according to three security officials.

A gun battle then erupted Sunday between Malik’s forces and the Abu Sayyaf. There were no immediate reports of casualties, and police and the military went on alert amid the fighting.

Australian Foreign Minister Bob Carr last month welcomed news that Warren Rodwell, 54, was alive after being held hostage for more than a year but said his prolonged captivity was a “major concern.”

Atyani was working for the Arabic satellite channel Middle East Broadcasting Corp. when he interviewed Osama bin Laden and his aides in Afghanistan months before the Sept. 11, 2001, terror attacks on the United States.

He said they told him that the coming weeks would hold “important surprises that will target American and Israeli interests in the world.”

He later moved to Al-Arabiya TV and traveled to Sulu to work on a documentary about the country’s volatile south, officials said.

On Friday, Washington renewed a longstanding warning to Americans not to travel to Sulu “due to the high threat of kidnapping… and violence linked to insurgency and terrorism there.”

The Abu Sayyaf, which has about 380 armed fighters in Sulu and nearby islands, is an extremist offshoot of a Moro rebellion that has been raging in the predominantly Catholic nation’s south for decades. The violence has been fueled by abject poverty, corruption, proliferation of illegal weapons and weak law enforcement.

Malacañang welcomed the news that the two Filipinos had been freed.

“President Aquino has been informed of it and we’re happy that the two Filipinos have been freed,” deputy presidential spokesperson Abigail Valte said.—With reports from TJ Burgonio, AP and AFP