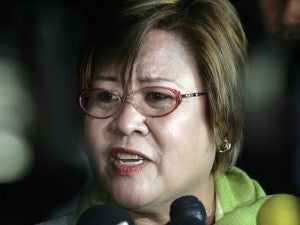 De Lima said that up to the last minute, they were given assurance by the Malaysian police that Manuel Amalilio, head of the Aman Futures group, allegedly responsible for defrauding hundreds of investors, may be deported.

“We are trying to verify what exactly is the reason [because] up to the very last minute, there was an assurance from the Malaysian police that there was no problem with them…We want to know who these higher ups are,” De Lima told reporters Friday.

“We are taking certain steps now to address the matter. This is just a temporary setback,” DeLima said assured.

She said among the documents that the National Bureau of Investigation had to prove was that Amalilio was a Filipino with a birth certificate issued by the National Statistics Office, a Filipino passport and NBI clearance.

De Lima said she was waiting for an update from the Philippine embassy in Malaysia.