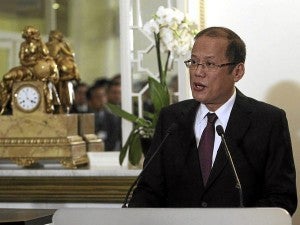 President Benigno Aquino spoke to the World Economic Forum about his administration’s anti-corruption efforts which he vowed to institutionalize into an “enduring mainstream of progress rather a mere blip in the radar and a case study for failed expectations.”

And while the President acknowledged that the work to uplift the lives of his  poor countrymen was “far from over,” he said the fight against corruption has so far yielded positive results for the economy, in turn benefiting not only the rich, but the majority of the people.

“We want our people to come to expect more from their government; we want to prove that their mandate, given freely during elections, counts for something,” Aquino said.

The President spoke on Thursday night before a private session linked to WEF’s anti-corruption initiative through a multi-sectoral group called “Partnering Against Corruption Initiative.”  It was a closed-door session that also included the chief of state of Mongolia, the prime minister of Peru and a member of the Indian Parliament.

In discussing recent initiatives, Mr. Aquino said there was “rampant corruption” in the government when he first assumed office in 2010, alluding to the rice importation binge of the National Food Authority and anomalous road projects under the Department of Public Works and Highways.

He also cited the impeachment of former Supreme Court Justice Renato Corona for the non-disclosure of the bulk of his wealth.

“What brought everybody together was that you had governments that were taking concrete steps and they were willing to share what they learned,” Carandang said.

“I think this is good because… when they hear straight from the leaders about what they are doing to fight corruption, I think it helps instil confidence in them because every one of those people was a potential investor in our country.  So when you explain all these things to them, they sometimes act a little surprised because some of the moves that we’ve taken are quite bold. So, I think, it creates a good impression of not just the leadership but the country in general,” he added.