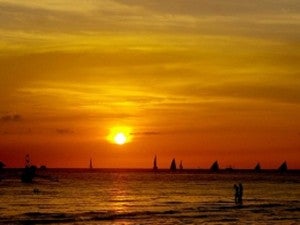 MANILA, Philippines – The Department of Foreign Affairs (DFA) on Monday said the Philippines had been given the distinction of “Most Romantic Destination” by a Chinese paper.

In a statement released Monday, the DFA said the award, based on a consumer survey, was given by the Shanghai Morning Post in a ceremony held at the Shanghai Peninsula Hotel on January 15.

The DFA noted that the award was received by Consul General Charles Jose, accompanied by Niel Ballesteros of the Philippine Tourism Office in Shanghai.

The DFA noted that the Philippines had earlier received one of the “Best Tourist Destination” awards given by the Oriental Morning Post during its annual World Travel – Special Trips Awards.

It also said that more Chinese were traveling to the country “especially during this winter season in China and for the upcoming week-long Chinese New Year holiday in February.”

It said that several Philippine carriers have also re-launched their flight services from China to the Philippines to cater to the growing demand of Chinese travelers for short-haul beach holidays.

It gave as examples Airphil Express, which reactivated its chartered flights from Shanghai to Kalibo on November 30, 2012; and Zest Air which also increased its regular flight frequency from Shanghai to Manila in December 2012.

“The regular multiple flight services to Manila continue to run steadily out of Beijing, Shanghai, Xiamen, Jinjiang and Guangzhou,” it added.

Both countries are embroiled in territorial disputes over atolls and reefs in the West Philippine Sea (South China Sea), believed to be the site of vast oil and gas resources.

The disputes among claimant countries have heightened in recent weeks, with a report of China’s plan to board and seize ships that enter what it claims to be its territory in the disputed sea.

China claims nearly the entire sea, while the Philippines, Malaysia, Brunei, Vietnam and Taiwan claim parts of the area, believed to be the site of oil and gas deposits.

China’s purported plan came days after it issued new passports bearing a map showing China’s nine-dash claims in the West Philippine Sea. Both the Philippines and Vietnam have refused to stamp the Chinese e-passports in protest of China’s claims, and have also sought China’s clarification on its new maritime patrol rules.

Read Next
BI issues reminder to foreigners
EDITORS' PICK
Cherry Mobile teams up with Cloud Panda PH, launches online store
Philippines’ COVID-19 cases accelerate to 18,638
‘Puno na lahat:’ Metro workers brave lack of public transport, rains on Day 1 of GCQ
Leveling up your ‘lutong bahay’ with the kitchen companion you never knew you needed
Duterte certifies as urgent anti-terror bill
Someone from the Philippines can become $356 Million richer this Tuesday
MOST READ
‘If I had not been SolGen, I will make you eat your words,’ Calida tells Coco Martin
5 car dealership outlets shutting down
Duterte certifies as urgent anti-terror bill
51 percent of German firms holding back investments in PH, but not because of COVID-19
Don't miss out on the latest news and information.