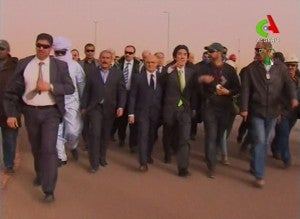 In this image made from television Japanese Parliamentary Vice Minister for Foreign Affairs Minoru Kiuchi, third from right, gestures as he is escorted around the Ain Amenas gas facility a day after special forces stormed the plant to end a four-day siege, in Algeria, Sunday, Jan. 20, 2013. The death toll from the terrorist siege at the natural gas plant in the Sahara climbed past 80 and two dozen foreign workers remained unaccounted for late on Sunday. AP PHOTO/CANAL ALGERIA VIA AP VIDEO

Here’s the latest information from Algeria on the dead and missing:

— 32 Islamist militants, according to the Algerian government.

— 23 hostages, according to Algeria. Another former hostage from Romania died in hospital after he was flown out of the country. Confirmed dead so far include six from the Philippines, three from Britain, two from Romania and one each from the US and France.

— 25 more bodies found Sunday, unclear yet whether they were hostages or militants, according to an Algerian security official.

— JAPAN: 10 Japanese working at the plant are unaccounted for, according to their employer JGC Corp.

— THE PHILIPPINES: Four Filipinos are still missing, a government spokesman said in Manila.