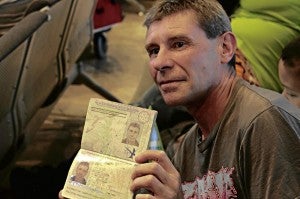 MANILA, Philippines—A man’s predicament that seems straight out of the Tom Hanks movie “The Terminal” finally had a happy ending at Ninoy Aquino International Airport.

A 52-year-old British tourist who had been stranded for nearly a month at Naia’s Terminal 1 was fetched on Wednesday by representatives of the British Embassy, which would now help him book a flight home.

The Inquirer learned this from airport workers who gave food and passed the hat to raise pocket money for Gary Peter Austin during the 22 days he spent at the departure lounge.

“He was nice and he said he was just waiting for a friend from Kuwait to help him. He slept on the gang chairs with his red luggage. He used the bathroom and changed clothes and he kept himself neat,” said janitress Ma. Hannah Bulabon, 32, of Dasmariñas, Cavite province.

Bulabon said she first saw Austin at the departure area in one of her shifts and that she was eventually befriended by the foreigner.

Airport authorities said Austin was supposed to leave the country on a Gulf Air flight on Dec. 17 last year. He arrived in Manila on Nov. 29 and went to Cebu province to see a friend whom he met at the Sta. Ana race track during an earlier trip to the Philippines.

The Briton, however, arrived at Naia only on Dec. 19. According to Bulabon, she first met him in the hallway at the departure area on Dec. 20. Having missed his flight, he failed to rebook another and had no ticket home.

“He said ‘Hi’ to me when we met at the hallway. I first thought he was an airline employee because he wore a shirt with a Gulf Air logo. But he later said he had no ticket and he only had P80. I gave him rice and viand. My coworkers also learned about his plight and gave him donations in the spirit of the holiday season,” she said.

She recalled that in the days that followed, the Briton would often look for her or send her text messages, his cell phone load courtesy of another airport worker. Later, some passengers learned of his predicament and also started pitching in to make his stay more comfortable.

Bulabon said Austin introduced himself as an “international jockey” and a divorced man with a 12-year-old son. He said he hails from Newmarket, a town in Suffolk county in England.

“He said he competed in horse races in Oman and other Middle Eastern countries. He showed me pictures of him with [Arab royalty]. He even has his rider helmet and crop inside his bag,” Bulabon said.

Bulabon confessed that she and other workers did not immediately report Austin’s plight to their superiors. “We thought he knew what he was doing so we let him be. I went about my work and I saw him every day.

“But when Christmas and New Year passed, we were all wondering why it was taking him so long to book a new flight. He might get arrested for overstaying,” she said.

Upon her and the other employees’ advice, Austin went back to the Gulf Air office to call the embassy. The airport’s public affairs office also finally learned about his case and also contacted the embassy.

Gulf Air, according to airport authorities, claimed that Austin’s e-ticket was canceled by his travel agent.

The Briton was fetched Wednesday morning by British Embassy representatives.

Bulabon said she last spoke with Austin on the phone Thursday afternoon, when he was already staying in a Pasay City hotel.

According to her, Austin may finally take his flight home in the next two to three days, which means he will be returning to Naia to say goodbye—and thank you—to the total strangers who kept his stomach full during his 22-day stay.