Half of all food thrown away, report claims 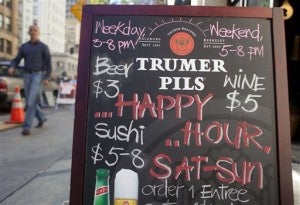 In this photo taken Monday, Aug. 6, 2012, a man walks past a sign advertising a happy hour at a restaurant on Second Street in San Francisco. Up to half of all the food produced in the world—two billion tons of it—is thrown away, according to a report published on Thursday, Jan. 10, 2013. AP PHOTO/ERIC RISBERG

LONDON—Up to half of all the food produced in the world—two billion tons of it—is thrown away, according to a report published on Thursday.

The waste is caused by poor infrastructure and storage facilities in the developing world, and “buy-one-get-one-free” offers, and the fussiness of consumers in the developed world, the report by the Institution of Mechanical Engineers said.

Every year, four billion tons of food is produced, but between 30 percent and 50 percent is never consumed, according to the report entitled “Global Food; Waste Not, Want Not.”

One of the worst offenders is Britain, where as much as 30 percent of vegetables are not harvested because they are misshapen and supermarkets will not sell them.

The report also suggests that half of the food that is bought in Europe and the United States is thrown away by consumers.

Dr Tim Fox, head of energy and environment at the Institution of Mechanical Engineers, said: “The amount of food wasted and lost around the world is staggering.

“This is food that could be used to feed the world’s growing population—as well as those in hunger today.

“It is also an unnecessary waste of the land, water and energy resources that were used in the production, processing and distribution of this food.

“The reasons for this situation range from poor engineering and agricultural practices, inadequate transport and storage infrastructure through to supermarkets demanding cosmetically perfect foodstuffs and encouraging consumers to overbuy through buy-one-get-one free offers.”

The report also found that 550 billion cubic metres of water is wasted globally in growing crops that were never eaten.

The institution said the demand for water production could reach between 10 trillion and 13 trillion cubic meters a year by 2050.

Fox said: “The UN projects that the global population will swell to 9.5 billion by 2075, meaning there will be three billion more people to feed.

“As water, land and energy resources come under increasing pressure from competing human demands, engineers have a crucial role to play in preventing food loss and waste by developing more efficient ways of growing, transporting and storing foods.

“But in order for this to happen governments, development agencies and organizations like the UN must work together to help change people’s mindsets on waste and discourage wasteful practices by farmers, food producers, supermarkets and consumers.”