2 US warships to dock in PH 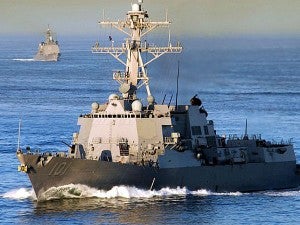 MANILA, Philippines–Two US warships will dock in Philippine waters on Saturday for a routine port call, the United States Embassy said on Friday.

The USS Gridley (DDG-101), an Arleigh-Burke Class Destroyer which forms part of the US Pacific Fleet, will dock in Cebu.

The ship, named for Captain Charles Gridley, Commander of the USS Olympia who was famously told by Admiral George Dewey to “fire when you are ready, Gridley” in the Battle of Manila Bay during Spanish-American War, is homeported in San Diego, California.

She was named in honor of the city of Bremerton in Washington, home to Puget Sound Naval Shipyard and a city with a long association with the US Navy.  She is the tenth ship of the Los Angeles class design, and her keel was laid in Connecticut in May 1976.

Both port calls emphasize the “strong historic, community, and military connections between the United States and the Republic of the Philippines.” It will allow the ships to replenish supplies as well as give the crew an opportunity for rest and relaxation, the US Embassy added in a statement.

Earlier this year, the US signified its intention to boost its presence in the Pacific by deploying a majority of its naval assets by 2020. Amid rising tensions between China and other Asian countries including the Philippines over the disputed Spratly Islands, the US said the deployment of their assets was not meant to challenge China.