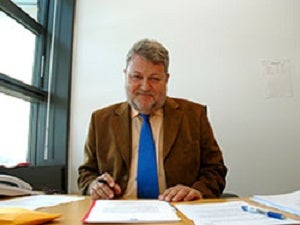 BRUSSELS—The territorial disputes between China and its Southeast Asian neighbors have reached the point of a “dangerous evolution,” according to a member of the European Parliament.

Robert Goebbels of Luxembourg, a member of the European Parliament since 1999 and a former journalist, urged the claimant states to resolve the disputes peacefully in international courts.

But Goebbels doubted that China’s ultimate goal is to provoke a military confrontation in the region. He said Beijing is apparently showing the world that it has “the necessary muscle” by investing heavily in submarines and an aircraft carrier, its first, which is “a typical offensive weapon.”

“That, to my ears, is a dangerous evolution,” Goebbels said in an interview with a group of journalists from Southeast Asia, including this writer, who were at the European Parliament in Brussels earlier this month on a media tour hosted by the European Union.

“Their goal is to show that ‘we have our own Fifth Fleet (a reference to the US naval force in the Pacific), we can operate wherever we like,’” Goebbels said.

“But it’s a dangerous situation because, even though I’m pretty sure there will be no more full-fledged war between superpowers or regional powers, you will never know. An escalation is quickly there and you end up having something nobody wanted,” he said.

Goebbels is vice chair of the parliament’s delegation for relations with the 10-member Association of Southeast Asian Nations (Asean), which includes the Philippines.

He is also acknowledged as the chief proponent of the Schengen visa system that fostered the integration of EU member countries.

Goebbels spoke about the territorial disputes when asked how he viewed China’s increasingly aggressive tactics in asserting its claims, including a new passport bearing a map that shows almost the entire West Philippine Sea as Chinese territory, and new maritime rules that allow border police from Hainan province to board,  search and expel foreign ships that enter what it considers its territory.

The new rules take effect on Jan. 1 but China has already sent out the first patrol vessel, the Haixun 21, which will go beyond the China coast and travel to as far as the Spratlys in the West Philippine Sea.

The Philippines, which claims seven islands in the Spratlys, on Friday said that it “strongly objects” to the deployment of the patrol vessel.

Such patrols will not boost China’s claim to the disputed territory, according to Raul Hernandez, spokesperson for the Department of Foreign Affairs (DFA).

“The Philippines strongly objects to the Chinese patrol of Philippine maritime domain in the West Philippine Sea,” Hernandez said.

He said the Chinese patrol violates international laws and will not help China advance its claims in the sea.

“Such a patrol will not validate the nine-dash lines and is contrary to China’s obligation under international law, including the United Nations Convention on the Law of the Sea,” he said.

Hernandez called on China to respect the Philippines’ territorial sovereignty in its exclusive economic zone in the West Philippine Sea.

Goebbels said he personally saw how the territorial disputes came to a head on the diplomatic front when he attended an Asean meeting in Lombok, Indonesia, as an observer two months ago.

He noted that past Asean meetings were “normally very diplomatic and very soft.” But in the Lombok exchanges “it was different and there was real debate mainly on the South China Sea.”

“It shows how geography is used to set claims. It is difficult to assess from the outside whose claims are better,” Goebbels said.

“The same goes for those concerning the islands. Whatever their names are, 99.9 percent of the world population would have problems locating those islands on the map, but here there is a fight going on” between China and the Southeast Asian claimants and between China and Japan, he said.

“Everyone has historical claims and everybody has occupied these islands once or twice and even more. We have international courts [that] can deal with that. You can go to The Hague or you can go to the maritime court in Hamburg that deals with these and try to have a judgment,” Goebbels said.

“But the problem is, for the moment, the situation seems to be escalating,” he said. With reports from Jerome Aning and AFP