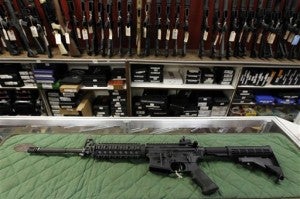 In this Thursday, July 26, 2012 file photo an AR-15 style rifle is displayed at the Firing-Line indoor range and gun shop, in Aurora, Colorado. AP

The gun has an indelible presence in America’s popular consciousness. The myth-making entertainment industry has embellished and magnified the gun’s prominent role in the narrative of the nation’s founding and rapid expansion across the continent over Indian lands and trackless wilds.

But reverence for history isn’t what’s really driving the soaring rate of gun ownership among Americans.

Today something stronger than the hunting culture or nostalgia for an adventure-filled frontier past is keeping gun fetishism alive — social paranoia. A dread of unseen threats against one’s personal safety feeds the demand for automatic assault rifles and handguns, much to the delight of obliging firearm manufacturers.

Up to 47 percent of Americans reported owning firearms in 2011, according to the Gallup Poll. Consequently, the US has the highest rate of gun-related homicides among the industrialized countries. Changing these statistics is a formidable challenge.

Widespread anxiety over perceived impending violence explains why there are 89 guns for every 100 American civilians, as reported in last year’s Small Arms Survey; that’s some 270 million guns nationwide, the highest rate of gun ownership in the world.

Many believe the high-caliber handgun or automatic rifle is their best defense against crime. Someone may want to invade your home, rape your wife and kill your children. A gun would enable you to “stand your ground,” many are convinced.

The gun is also a tool for projecting personal power. This function has even spawned an “open-carry” movement that would allow men and women — who no one should try to “mess with” — to walk around like gunslingers of the old West.

And while no one really believes the United States is in danger of a military invasion by any foreign power, a good many gun worshipers believe that they need to be prepared for a social cataclysm of sorts, like mass unrest or a catastrophe that ultimately leads to widespread looting and depredation.

At its core, then, is a lack of confidence that the state can provide sufficient protection to its citizens. Tied to this is a profound sense of individualism, of a deeply held belief that only the individual, not the community or its laws, is the real guarantor of one’s safety.

Thus, while liberals may share some of these same insecurities, the cult of gun ownership is, as most observers already know, conservative at heart.

Writing in the New York Times, number cruncher Nate Silver draws the link between politics and gun ownership: White Republicans are more likely to own guns than white Democrats; by 2010 gun ownership among Democrats dropped to 22 percent but remained at 50 percent among Republican adults.

In its extreme form, gun worship is xenophobic and racist. Self-proclaimed militias and many so-called doomsday “preppers” fear a creeping United Nations “takeover” of the US. They also warn of an impending race war in which one must be prepared to defend one’s home and family against marauding and rapacious black and brown hordes.

While owning a gun is indeed as American as cherry pie, it need not remain part of this country’s traditions. Owning a broadsword is not as British as steak and kidney pie, despite the prominent role of bladed weapons in British history.

It is admittedly not going to be easy to erase the prevalent social delusions that fuel gun ownership in America, but stricter laws and regulations can and should start preventing its lethal consequences. The law of the jungle through the proliferation of guns has no place in civilized life.