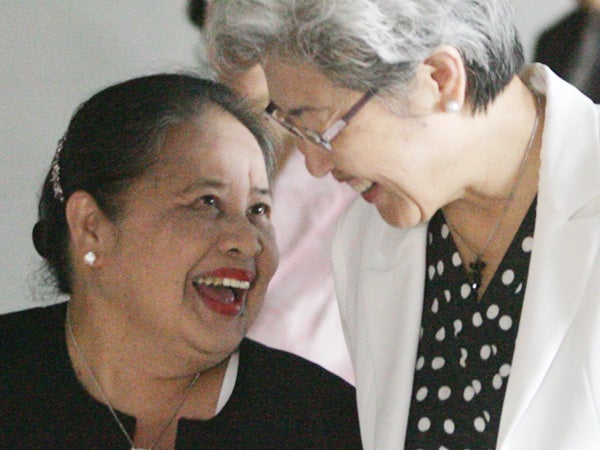 President Benigno Aquino on Wednesday said he would appoint a senior diplomat as new ambassador to China to show Manila was serious about resolving a territorial dispute with Beijing in the South China Sea.

Mr. Aquino said Foreign Undersecretary Erlinda Basilio was “highly recommended” by Foreign Secretary Albert del Rosario because of her “wealth of experience,” seniority in the foreign service and “the skills to build bridges to China.”

Basilio, 68, who helped draft national diplomatic policy, will take over a post that has been vacant since the previous ambassador, Sonia Brady, had a stroke in August as the Philippines and China sparred over ownership of Panatag Shoal (Scarborough Shoal) in South China Sea waters known as the West Philippine Sea.

Brady was stricken four months after Chinese and Philippine ships started to face off with each other at the shoal in a neighbors’ quarrel over marine resources. The Department of Foreign Affairs (DFA) brought her home in late September.

Basilio’s appointment comes as China tightens its claim to nearly the entire South China Sea, recently issuing new passports that show the territories it insists it owns and announcing new maritime rules that authorized its border police to board, search and expel foreign vessels that enter what it considers its waters.

Mr. Aquino disclosed his choice of Basilio as a new ambassador to China in a talk with reporters after he spoke at a meeting of the League of Municipalities of the Philippines at the Manila Hotel.

He said his nomination of Basilio should show “how important our relations are with China, and how serious we are of trying to achieve an understanding with them.”

The President said he was waiting for Basilio’s papers from the office of Executive Secretary Paquito Ochoa Jr.

“[We’ll appoint her] as soon as we [can] submit her name to the Commission on Appointments,” Mr. Aquino said.

China welcomed Basilio’s nomination, saying it was optimistic about improved relations with the Philippines through a new ambassador.

“We attach importance to our relations with the Philippines,”  Zhang Hua, spokesperson for the Chinese Embassy in Manila, said in a statement issued after the announcement of Basilio’s nomination.

“It is our hope that the early appointment of the new ambassador may facilitate the communication between both sides and the development of our bilateral relations,” Zhang said.

“Ambassador-designate Basilio has the necessary skills to build bridges to China and articulate the policies and positions of our country on important issues. She will play a role in shaping our evolving and increasingly complex relationship with China,” he said.

One of the top senior diplomats at the DFA, Basilio has been actively involved in talks concerning the West Philippine Sea dispute with China.

“The DFA welcomes and fully supports her nomination as the next ambassador to China,” Raul Hernandez, DFA spokesperson, said in a text message.

Basilio has been a diplomat since the 1970s and has served as ambassador to Sweden and at posts in Switzerland, Cuba and Japan.

At the DFA, she served as assistant secretary for Asia and Pacific affairs from 1995 to 1997 and undersecretary for policy from 2006 to 2007.

“She is a seasoned professional in diplomacy and she is up to date and fully informed of various issues in foreign policy. We rely on her to enhance the bilateral relations between the Philippines and our very important neighbor and friend, China,” Hernandez said.

Fu, who handles Asia, boundary and ocean affairs, and translation and interpretation for the Chinese Foreign Ministry, has been involved in discussions of territorial disputes in the South China Sea.

Basilio was part of the Philippine delegation to the Asean ministerial meeting in Phnom Penh, Cambodia, in July that ended in disarray after Cambodia blocked the Philippines’ and Vietnam’s effort to have their brushes with China in the sea mentioned in the customary joint communiqué.

As a result, Asean failed to issue a joint communiqué, the first time it happened in the bloc’s 45-year history.

In an article published in Manila newspapers, Basilio said Asean members had already agreed on key points of a proposed code of conduct in the disputed waters when Cambodia pushed the issue out of discussions.

Her article prompted a rejoinder from China ally Cambodia, which accused the Philippines and Vietnam of playing “dirty politics” by pressing for a united Asean stand in the sea disputes.

The exchange soured relations between the Philippines and Cambodia and caused the recall of the Cambodian ambassador to Manila, Hos Sereythonh.

Besides the Philippines and Vietnam, Brunei and Malaysia, as well as Taiwan, claim parts of the South China Sea, a strategic waterway that is home to sea lanes where more than a third of global trade passes and where proven and estimated oil reserves are placed at 213 billion barrels.

It will now be Basilio’s job to prevent the dispute between the Philippines and China in the sea from erupting into armed confrontations.

Briefing reporters in Malacañang ahead of the Asean summit in Bali, Indonesia, in November last year, Basilio indicated that diplomatic patience might eventually work with Beijing.

“It’s like a [rock]—a constant pour of water will certainly erode [the rock], however hard [it] is,” she said then, expressing hope that a united Asean stand would make China agree to concessions.

The Philippines has been pushing for a “zone of peace, freedom, friendship and cooperation” by setting up a rules-based regime to govern the area.

Asean and China adopted a nonbinding declaration of conduct in 2002 to discourage hostile acts in the West Philippine Sea. The Philippines and the other claimants want the declaration to be strengthened into a binding code of conduct. With a report from AFP